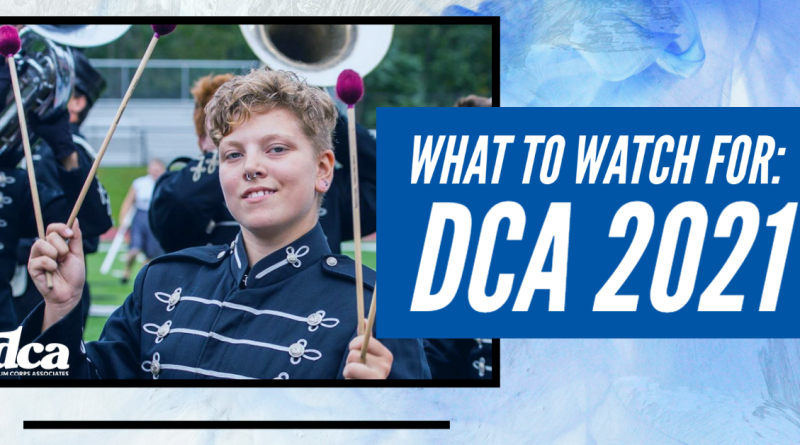 DCA drum corps is coming straight to your living room; eight weeks of competitive performance all in one place, all for one price.

A fully virtual season is a bold, brand-new concept within the drum corps activity. So, what can you expect from your subscription?

For one, you’ll get multi-angle views of fantastic performances every single week, and you’ll have the opportunity to vote for each week’s Fan Favorite Award, but that’s just scratching the surface. There’s so much more in store.

The long-awaited DCA season kicks off; for the first time in over two years, drum and bugle corps will be competing for top marks. It’s finally back.

Each week this summer, DCA’s live broadcasts will featuring compelling panel discussions with a variety of faces from around the marching music community. To start off that series, a panel of accomplished adjudicators — including Marty Griffin, Tony Smith, John Kreitzer and Rich Guillen
— will discuss the virtual judging platform.

2021 marks the 100th anniversary of The American Legion’s involvement in drum and bugle corps competitive events.

As such, Steve Vickers, publisher of Drum Corps World magazine, will join the broadcast to discuss The American Legion, its history, and its role in the evolution of the drum corps activity.

Various educators from the Drum Corps Associates community will come together to discuss the educational and instructional benefits of the DCA experience.

As the 2021 DCA summer season reaches its midway point, August 8’s event will be devoted to memorializing the many lives lost in the past two years from around the DCA community. As part of its Midseason Celebration, DCA will pause to honor those lives in lieu of a panel discussion.

The Memorial will be hosted and narrated by longtime announce Fran Haring, who will share a brief narrative in honor of those who have passed away.

This year, we’re celebrating the 75th anniversary of the Hawthorne Caballeros! In honor of the corps hitting its three-quarter-century mark, this week’s panel discussion will be devoted to all things Hawthorne.

As the season’s competition ramps up toward the DCA Championships, one member of each performing corps will join the broadcast to discuss their experience with their corps and the DCA activity as a whole. Members will have the chance to share why they’ve taken part in DCA, and what the benefits to their marching music career have been as a result.

One of drum corps most recognizable faces and voices, DCA is excited to welcome Dennis DeLucia to its list of panelists for the 2021 summer. DeLucia is a member of the DCI, WGI and Percussive Arts Society halls of fame, and has taught the likes of Muchachos, Bridgemen, Star of Indiana, Crossmen, Sunrisers, Caballeros and the Bridgemen Alumni Corps.

DeLucia will join the broadcast to discuss the importance and viability of Drum Corps Associates, and its vital role in the marching music community.

On the eve of its 2021 championship event — Saturday, September 4 at 7 PM EST — DCA will host an event solely featuring alumni and mini corps ensembles, with Steve Andermann as the night’s emcee.

Then, on Sunday, September 5, the 2021 season will reach its peak, as more than a dozen participating corps compete for the title of 2021 DCA Champion.

For just $49.99, you can experience all eight weeks of exciting live broadcasts by subscribing at http://watch.dcacorps.org/