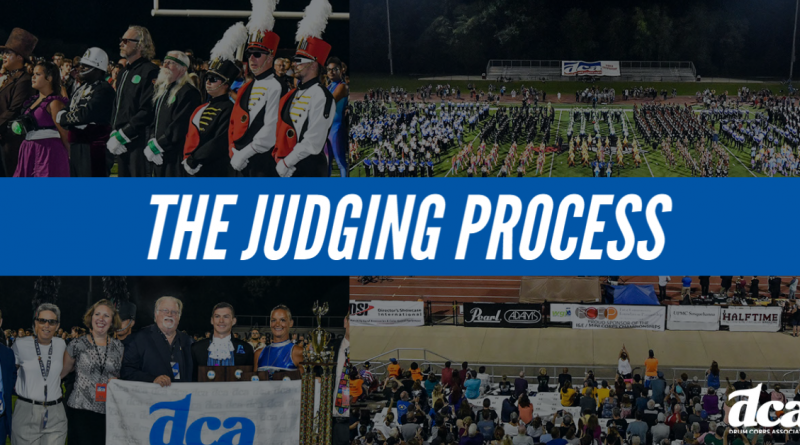 And that’s not always common. But John Kreitzer, Marty Griffin, Rich Guillen and Tony Smith have made it common.

For more than a decade, the quartet has been managing Drum Corps Associates’ judging systems swimmingly, backed by the trust of DCA’s competing organizations.

“They’re a good bunch of guys,” Kreitzer said of his fellow judging adminstrators. “I don’t know how we lasted this long, but we’re still here.”

Now, in their lucky 13th year working with one another, Kreitzer and his team have a new challenge to face — judging in the virtual space.

Of course, there are pros and cons to any new endeavor, and 2021’s judging process is no exception.

As part of DCA’s very first virtual broadcast — set for Sunday, July 18, at 7 PM — Kreitzer, Griffin, Guillen and Smith will be sharing more about virtual adjucation and their experiences with the new platform.

“I think there’s a level of trust,” Kreitzer said. “I think the the directors trust what we’re doing. And they know that we have some good quality judges out there.”

Sunday’s talk on judging will be the first of many panel discussions, which are an exciting feature of DCA’s 2021 virtual offering.

The 2021 summer season, which includes eight weeks of competitive action, will feature competitive performances recorded remotely by each participating corps and edited by Box 5 Media, as well as commentary on a variety of topics.

Subscriptions to catch all eight weeks of action are just $49.99, and can be purchased at dcacorps.org/watchdca.

“You can’t praise the corps, the staffs, the management, the members, and the DCA administration enough,” Kreitzer said. “And (DCA President) John Carr and his crew did an amazing job pulling this thing together. We’re excited about it.”

Get to know Sunday’s Panelists

JOHN KREITZER, Judging Coordinator — John has been involved with marching bands and drum corps for close to 45 years.  Following his time as a performer, he began working as an instructor for numerous high school bands and drum corps. High school bands he has worked with have earned many championship awards in Cavalcade of Bands and Tournament of Bands.  He began judging in 1978 with the Mid Atlantic Judges Association. He has judged with the National Judges Association (TOB, TIA), Cavalcade of Bands, Cavalcade Indoor, Keystone Indoor, Festivals of Music, and Homestead Festivals. He has been selected to judge many championship contests. He began judging with DCA in 1985.  He has had the honor of judging many DCA championship weekends, including prelims and finals on each visual caption. He became the judging coordinator of DCA in 2008 and continued in that role through the 2019 season.  He continues to perform as a tuba player with large groups and small ensembles in Central and Southern Delaware (source: Maryland Marching Band Assocation).

MARTY GRIFFIN, Visual Caption Supervisor — Marty Griffin received his undergraduate degree in music at William Paterson University, where he performed with the New Jersey Percussion Ensemble and the New Jersey New Music Ensemble. He also has a master’s degree in Educational Leadership from Kean University. Marty has been a Band Director in New Jersey for 29 years, and he is currently the Director of Bands and Coordinator of Fine Arts at Monroe Township High School. His responsibilities include directing the Marching Band (16 years), Wind Ensemble, Jazz Ensemble, and Percussion Ensemble as well as teaching AP Music Theory. The MTHS Marching Band was US Bands State and National Champions in 2013 and they were selected to represent New Jersey at the 75th anniversary of Pearl Harbor in 2016. Marty performed for five seasons with the Hawthorne Caballeros Drum and Bugle Corps and he has been a percussion arranger for high school bands throughout New Jersey since 1987. Currently Marty is the percussion arranger for JP Stevens HS, the 2017 Group 6 NJ State Champions and a 2018 BOA Regional Finalist. Marty currently judges for numerous organizations including Winter Guard International (WGI), Bands of America (BOA), and Drum Corps International (DCI). In 2006, Marty was selected to judge for the Drum Corps Japan Championships held in Yokohama, Japan. He is currently the Percussion Caption Head for Drum Corps Associates (DCA), the judging coordinator for The Mid Atlantic Percussion Society and he is member of the WGI Percussion Advisory Board (source: Maryland Marching Band Assocation).

RICH GUILLEN, Brass Caption Supervisor — Originally from Kearny, New Jersey, Mr. Guillen has been a music educator for over 30 years. He received his Bachelor’s Degree in Music Education from Kean University of New Jersey in 1989 and his Masters Degree in Music Education from Western Connecticut State University in 2002. From 1989 to 1997, he was director of bands at Central Regional High School in Bayville, NJ, growing the small program there into a two-time state and regional marching band championship and a state jazz ensemble finalist. In 1997, Mr. Guillen joined the music faculty at Arlington High School in the Arlington Central School District, located in LaGrangeville, NY. His current responsibilities include serving as the district’s K-12 Music Department Coordinator and High School Director of Bands. Beginning in 2012, Arlington’s comprehensive music program has been named as one of NAMM’s Best Communities for Music Education in the U.S.A. every year (source: Maryland Marching Band Assocation).

TONY SMITH, Percussion Caption Supervisor — Tony Smith first started teaching and writing percussion when he was sixteen and would go on to teach, write and judge Drum Corps percussion nationally. In 1976 he would established his own design company A.S.I. specializing in Retail Store Design The same year he went from Percussion Judge and Arranger, to Drum Corps Visual Designer. Through the years his company has completed over one thousand design projects worldwide and is considered one of the most respected firms in the retail design field having won numerous Design Awards. Tony has taught and designed for many Drum Corps including the Boston Crusaders, Crossmen and the undefeated 1982 Blue Devils as a Visual Designer. Recently he has been involved with DCI, DCA, Local and Regional H.S. Bands as a Visual Judge, developing and presenting design clinics on How to Recognize and Reward Design in Drum Corps (source: Blue Devils).