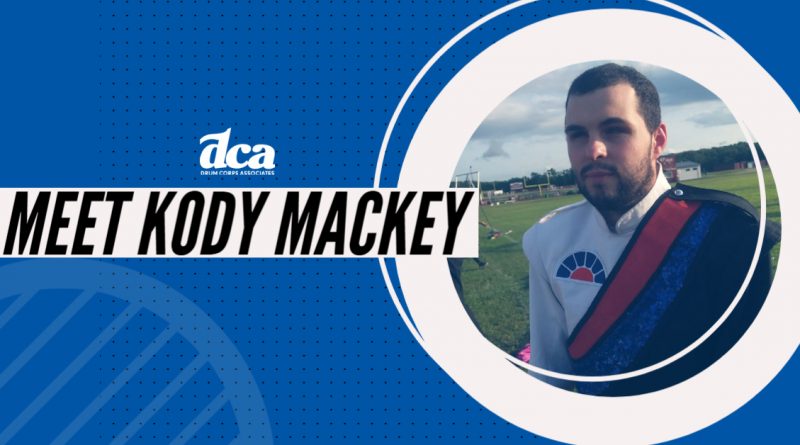 As we travel on the road of life, there are always obstacles that are placed in our way. Some are minor and easy to fix. Some are life altering such is the case for Kody Mackey, age twenty-one, who is a front ensemble member of the Sunrisers and has been blind since birth. The only usable vision that he has is light perception, meaning he only has vision on the light spectrum. That is advantageous for a few reasons such as trying to figure out certain things like if a building is nearby based on the sun’s reflection as well as determining cardinal directions based on the direction of the sun depending on the time of day to aid in navigation.

Kody has had several years of musical experience, mostly self taught with some formal instruction over the years. He is a church organist as well as he plays a little bit of guitar here and there. He is also versed in playing several other instruments in the melodic percussion family such as the marimba. When Kody learned the percussion side of things, he never really had any formal instruction, but the band director in his high school along with some of the other members  and he managed to figure it out and they worked with him. He also was in the concert band in Sachem North High School for a while as well as him being inducted into the TRI-M International Music Honor Society. Kody also did a level 5 NYSSMA solo piece on the piano and scored a 93 out of 100 ! This is his second year with the Sunrisers and what happened was, like the rest of the drum corps, when COVID-19 hit everything went virtual, so he had to send in recordings instead of being able to meet up in person. Hopefully everything will be back to normal next year.

Drum corps was something that Kody was brought up around, because of his family involvement in the activity over the years from when he was able to grasp any sort of concept of what it was as a child up until now. There would always be either a recorded DCA show playing in the house, or when his grandfather would get home from marching with the Hawthorne Caballeros Alumni Corps. That would be their conversation at the dinner table and it would definitely fascinate him to the point where he joined the Sunrisers a year ago. Also, ever since he was a small child, Kody has NEVER missed one Grand Prix show in Clifton, New Jersey and that was one show that was always guaranteed that he would go to and be a spectator at before he joined the corps. His grandfather, David Saccente Sr., as well as his uncle, Dennis Saccente both marched in the Sunrisers from 1969 until 1971. They then marched in the Hawthorne Caballeros from 1972 until 1978. They also marched in the Hawthorne Caballeros Alumni Corps from when it was formed in 1994 until they both retired from their marching days. His grandfather marched in the drum line of both corps while his uncle was a member of the horn line of both corps.

How does Kody learn his show music on the synthesizer with his handicap you ask ? He learns it by his pit tech sending him an MP3 of the music a few days before the show so he can learn the music at home by ear before rehearsal. Other than that and him not reading the music at the rehearsal, it is not too different from how anyone else would do it. When it comes to knowing when he is supposed to play at what time, other members help him with that, to which he can’t thank them enough. He can’t say anything better about his fellow corps members or staff as they have been and are there through anything that he would need. He also knows he can rely on them as all he has to do is ask or say something to someone. He has made some great new friends in the corps who he will most likely stay in contact with for the rest of his life. That doesn’t go just for his section, but that goes for all of them, as he could never ask for more or expect it.

Kody is now getting involved in the Ronkonkoma Fire Department in Ronkonkoma , New York. He does not have any given position as of now. He also has family members who are involved in that such as his grandfather. Since he is familiar with radio communications equipment, the Chief of the department wants him to possibly program some of the radios such as their Motorola monitor pagers. He is also being placed on the members list, but does not need to meet the call quota because of his blindness. Since he knows a lot about firematics, there are other opportunities for him to assist when needed. This September, Kody will be attending Five Towns College as a Bachelor of Arts in Mass Communications student.

He has hobbies. Several of them. Bowling, ham radio, music composition and arranging, working on computer and electronic equipment, eating and discovering new restaurants. He recently just got a new passion to start cooking, baking, and grilling.

I asked Kody how has he been able to overcome all obstacles that have been placed in front of him due to his blindness. He responded ” I would say that is determination to succeed. I don’t consider the blindness a handicap to be honest, I guess it’s because I was born that way and I don’t know any difference between not having and having it. I wasn’t expected to do much but I have always done more than what was expected. I always disciplined myself to succeed regardless of what obstacles were in my way, and even if I was told I couldn’t do something, I tried it anyway to find out for myself or to see if I can prove those people who said that wrong. “

I then asked Kody to pass along a message to all the drum corps fans and those who have handicaps. Kody’s answer is genuine and to the point. He said ” For those who might want to get involved in the activity of drum and bugle corps, and might think that it’s very difficult to get involved, discipline yourself to get the courage to come down and either audition or get involved in any way you can. Whether it be marching or be playing in the front ensemble, we always need people to keep the activity alive. If you are blind or have some other disability, that shouldn’t get in your way, if you’re a musician and you think you can do it, let that go to your heart and go through with it and do it. Put your mind and heart into anything you think can be accomplished. I want to thank everyone for reading this. I hope all of you have learned something and maybe more people who have a similar limitation get involved now that they saw it if they did. Remember, possibilities are endless regardless of limitations.