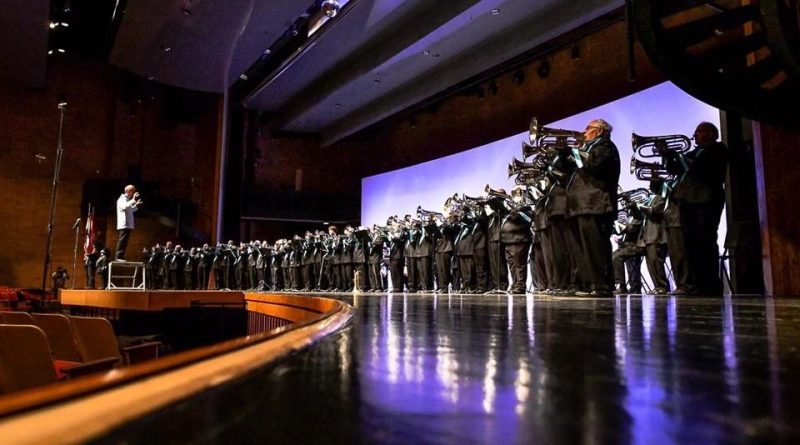 After over a year of inactivity due to the COVID-19 pandemic, the Hamburg Kingsmen Alumni Drum and
Bugle Corps has returned to scheduled rehearsals and public performances. Winter recruiting took place in anticipation of looser restrictions and the corps re-instituted rehearsals in April. The Kingsmen made its 2021 debut this past Saturday afternoon at the Strawberry Festival in Brant, New York.

The Kingsmen were originally one of the top drum and bugle corps in the world, appearing in contests throughout the United States and Canada. Although the corps left the competition scene in the mid- 1970s, the alumni corps was organized in 2012 and began regular public performances locally and, later, at the annual Drum Corps Associates’ “Alumni Spectacular” exhibition in 2014. Members of the corps include former members of the competing corps and others who competed against the Kingsmen from New York, Pennsylvania, New Jersey, Connecticut, North Carolina, Florida, Nevada, Tennessee, Canada, and South Korea. This year’s “Alumni Spectacular” will be performed virtually and offered to the public online over Labor Day weekend.

The corps’ next performance will be on Saturday July 3rd, in Warren, Pennsylvania, in that town’s Independence Day parade. The corps is self-supported and is an IRS 501(c)(3) non-profit organization. For more information, visit the corps’ website at http://www.hamburgkingsmenalumni.com or e-mail Corps President Paul Neiss, Jr. or Secretary Marcie Delgaty at kingsmenhamburgalumni@gmail.com.

You may contact the above individual for confirmation of this information.