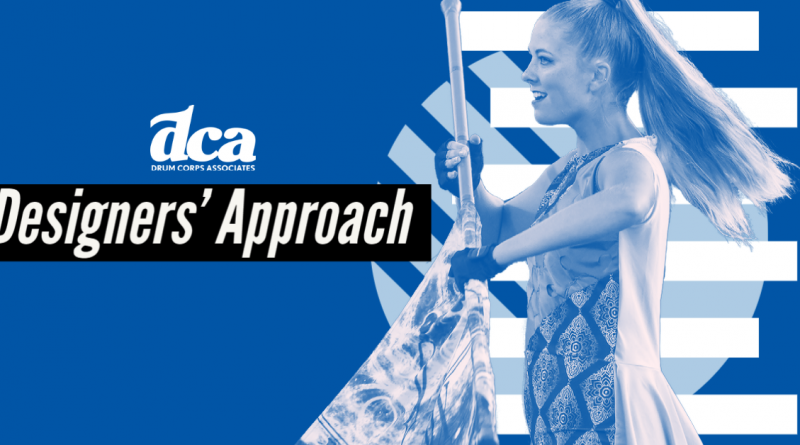 Why don’t we create a Bruno Mars concert?

It was a sentence Bobby Jones had probably never uttered in his design career. But when developing performance material for a brand-new virtual platform, you’re bound to at least try something new.

Jones, the program coordinator for Fusion Core in 2021, was inspired by a Bruno Mars concert he’d caught in 2016. Much like a drum corps show, a touring concert featuring the performance magnitude of a Bruno Mars setlist is about the same no matter where you see it. But somehow, it’s still a thrill for each unique viewer.

That’s what Jones wanted to capture in 2021, knowing full well audiences would be watching his corps’ production every Sunday, on the same screen, on the same field.

“It was just so professionally done, but so engaging, so inviting,” Jones said. “You know, the Bruno Mars concerts, they’re the same every single show until they change what that show actually is. So, when speaking with the design team at Fusion, I kept throwing that phrase out, ‘Why don’t we create a Bruno Mars concert?’ Why don’t we create a feeling that is engaging to the audience?”

“Let’s show the skill set of Drum Corps; we can do drill, we can play, we can drum and we can spin,” he added. “But at the same time, let’s also show the audience that we can entertain, and we can keep them in their seats in their homes.”

It’s questions like these that have been the major focus for designers across Drum Corps Associates in preparation for this summer’s virtual season. As fans across the country — who can subscribe to the entire season’s virtual package for just $49.99 at dcacorps.org/watchdca — tune in from home, the hope is to create something they’ll be excited to return to every Sunday.

“The second that we are disengaging; guess what? They’re not watching,” Jones continued. “And since DCA is selling these subscriptions, that became the most important vehicle to me about putting the show together; we need to make sure the audience sits in their chairs and enjoys and wants to come back week to week.”

As such, for Jones and company, the name of the game has been shifting toward hummable melodies, and building a visual package that fits the field they’ll be utiilizing as their stage week in and week out.

“When we sat down with the design team, I just wanted to talk about melody, I want to talk about things that the audience is going to recognize,” he said. “There’s a reason why we download things, because we love our favorite songs, we want to listen to our favorite songs. And there’s that same kind of feeling with drum corps.”

2021’s changes in design approach for Matt Hurley and his design team at Hawthorne Caballeros have been less pronounced — their personal goal has been to create as “normal” a season as possible — but the process itself has certainly been adapted to fit the unique nature of the 2021 platform.

And arguably the most valuable asset in achieving that goal? Pyware. The drill design software has been a crucial cog in Hawthorne’s design process, mainly because of the customization it provides in terms of three-dimensional angles through which users can view the product they’re creating.

At the end of the day, DCA corps will be afforded two camera angles; one for high-camera. There won’t be people across the stands viewing their show from different angles along the full sideline — some high, some low, some centered, some distant.

So the Caballeros’ designers honed in on that centric view, and made that their starting point.

“We have plenty of videos from the exact spot we’re going to film,” Hurey said. “I’m not a Pyware expert, but the person who stages our show, we were able to get videos that were at the same angle, because for the background to used angles of previous videos that we had.”

Part of the reason for keeping things as close to a typical year as possible, though, for Hawthorne, had to do with their production itself; to put it simply, it had already been completed in time for what would have been the 2020 season.

“We were really excited about the show,” Hurley added. “And we decided that in coming back, we wanted to give the members as close of a normal experience as possible. Everybody was excited about our show before we had to shut down, and a lot of design hours and planning went into it. So, that’s why we decided to do that.”

Ultimately, 2021’s unique stage has provided its own challenges and questions for each corps as preparations ramp up for the summer. Some have taken the virtual season as a chance to reimagine their design approach; others have taken their normal processes and honed them for a virtual platform.

But the one thing that’s shared across the board is a goal to entertain, and to provide an enjoyable performance experience for members and fans alike.

“We’re going to do it the best we can,” Hurley said. “I’m sure there will be mistakes made along the way, right, but we’re going to hope for the best.”

And if there’s one thing that drum corps fans can expect when they sit down to watch each of eight virtual competitive events in the comfort of their own living rooms, it’s exactly that.

“We’re going to lose the raw energy and the intimacy of live,” Jones added. “But we can still be on camera and be entertaining and be engaged.”