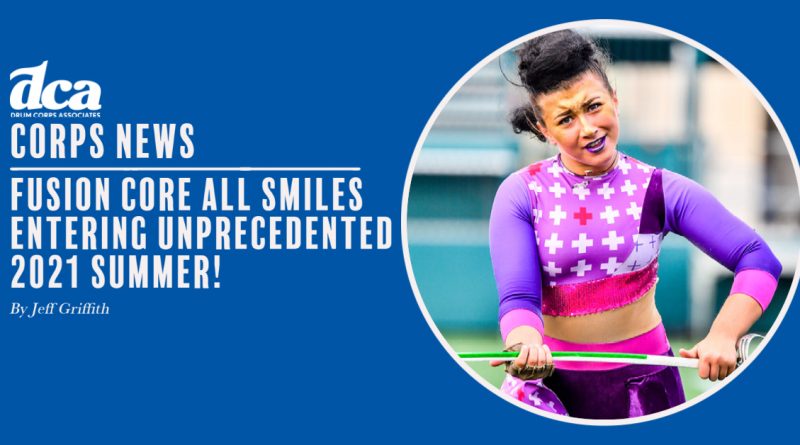 It’s ironic, when you hear Fusion Core director Holly Marino explain it. “Smile” — which is the title of the New Jersey corps’ production for the 2021 virtual Drum Corps Associates — has actually been in the works since the fall of 2019.

And it was supposed to be the corps’ 2020 program; before the pandemic. Before the lockdowns. Before live drum corps disappeared for an entire calendar year.

All along, the program was to be themed, essentially, around the message of George David Weiss and Bob Thiele’s “What a Wonderful World,” the 1967 chart made famous by Louis Armstrong. It’s about peace and happiness. It’s about joy. But further, it’s about the joy that emerges from darkness and hardship.

If you think about it, in a microchosmic sense, it’s about the summer of 2021.

“We had a show idea for last year, and it was based around ‘What a Wonderful World,’” Marino said. “This is such an ironic type of show that was built for last year and segued into this year.”

For Fusion Core, for the drum corps activity, and for the world, the summer of 2021 has the likely potential to be an explosion of joy that emerges from the numerous trials that encapsulated our most recent trip around the sun.

Zooming in on the New Jersey-based corps’ experience with this concept reveals a group of performers, instructors and administrators who — like the rest of their peers throughout the activity — have been anxiously awaiting their return to the field since August 2019.

Fusion Core got that return in April, and has been rolling through Saturday-only rehearsals ever since, in preparation to bring “Smile” to DCA’s virtual audience this summer.

“As soon as April hit, we were out, we were meeting in person,” Marino said. “It was fun, because even though it was still cold, and it was a little earlier than we normally would start, everybody was so anxious just to kind of get out there and do our thing.”

Marino added that, while there was apprehension early about what the unique 2021 Fusion Core experience would look like, once the wheels hit the asphalt, members began coming out of the woodwork.

“Whenever something is new, people are a little hesitant to just jump right in,” she said. “But with each week, and the momentum that’s building, and the members spreading the word… for the most part, we’re in a good place.”

And Marino — as well as her corps — is excited about that prospect.

On one hand, she’s excited for the corps itself. Members are back on the field, honing their skills, strengthening their friendships and perfecting their show.

There have even been requests from members to add more rehearsals to the schedule.

And Fusion Core will in fact be adding Sundays to its schedule in August as the DCA Championships near. But right now, even just the one day each week has yielded great experiences for the corps.

But Marino also expressed excitement for fans, and understandably so, emphasizing the incredible opportunity to experience live drum corps in living rooms across the country, each week, for just $49.99. That price will encompass a complete competitive season, with eight events including DCA Championships, and fans can subscribe to the full season at dcacorps.org/watchdca.

It’s an offering unlike any other drum corps season, and in some senses, it’s a pretty ideal setup for a drum corps fan looking to relax on a summer night.

“You know, I think that what DCA is doing, I’ve got to be honest with you, I think they’re doing an amazing job with this,” she said. “And it’s so affordable. $49.99, and that’s for the whole season? From the comfort of your home, with a pizza or whatever, I mean, it’s fantastic. It’s amazing how accessible it is.”

And ultimately, while this season will be competitive, and each week will be fully judged and fully scored, there’s an understanding that bringing pure entertainment to those living rooms is a key component to such a unique year.

That’s why Fusion Core’s repertoire will be chock full of recognizable, hummable tunes, like Three Dog Night’s “Joy to the World” and Bobby McFerrin’s “Don’t Worry Be Happy.”

“Our goal this year is to put something out there that’s going to feel good,” Marino said. “And, you know, just segue back into the norm, with something that’s going to be fun to watch, fun to perform, and fun to teach.

“We want people to get up off their couches and walk to the refrigerator whistling,” she added. “Like, feeling really good, saying, ‘That was a good song. That was fun.’”

Ultimately, it’s clear that “Smile,” being the serendipitous metaphor for 2021 that it is, is intended to bring its title to the faces of those who perform it and watch it.

Of course, even just having corps members back on the practice field has already had that effect, and will undoubtedly continue to do so into the summer months.

And as such, one thing rings true. It’s been a difficult road to this point, but it’s good to be back.

“Even though the world around us sometimes can be very dark,” Marino said, “And even though sometimes we’re faced with so many different challenges, at the end of the day, it’s a wonderful world, right?”