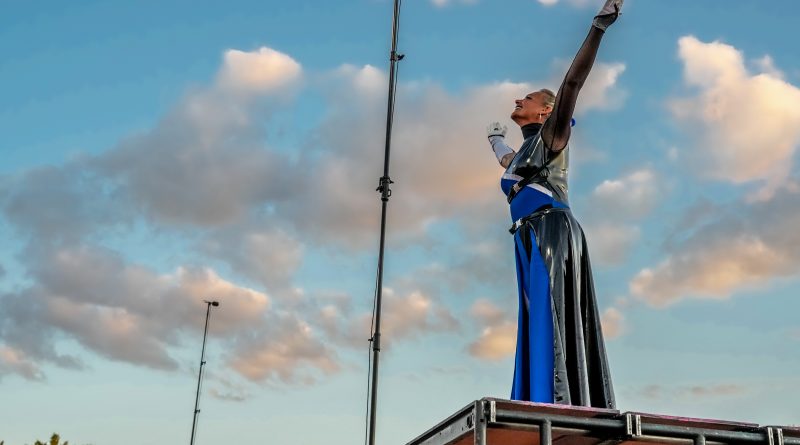 Beyond the plethora of competitive intrigue, Saturday marked DCA’s first World Championship performances in three years, and its first in the “Flower City” since 2017.

“It’s such a relieving feeling,” Fusion Core trumpet soloist Nick Caljean said. “It’s so nice to not only be back in Rochester, but to be back in a live Championship setting.”

In the third head-to-head installment in a close season-long race, Reading Buccaneers (1st, 96.875) came out on top of the World Class division, just 0.55 points ahead of Hawthorne Caballeros (2nd, 96.325).

Both Reading Buccaneers and Hawthorne Caballeros — who were separated by less than a point in both of their previous 2022 matchups, both of which went the way of the New Jersey corps — have plenty on the line as they race to the finish line. The Reading corps looks to return to gold medalist status for the first time since 2019, while Caballeros seeks to defend its 2021 title.

“Tonight’s performance was amazing, it was a great run,” Caballeros drum major Kimberly Roman said. “Being here is amazing, it’s so good to see our hard work pay off.”

Bushwackers (3rd, 92.525) fended off White Sabers for a spot among the overall and World Class top three, but White Sabers (4th, 90.325) weren’t far behind, as one of four corps on the night to break 90 points.

Purchase tickets to the 2022 DCA Finals

Atlanta CV and Hurricanes — two Open Class corps who were separated by less than half a point when they last met before Saturday — were once again closely matched in Prelims competition.

For Atlanta CV — which is celebrating its 25th anniversary in 2022 — the trek to Rochester was one of the longest of Saturday’s competing corps. But according to Thompson, the payoff was well worth the journey.

“We’ve talked about this thing in Rochester all year long,” Thompson added. “Finally being here, being in front of a crowd, and seeing everything come together has been pretty fantastic.”

Rogues Hollow Regiment and Cincinnati Tradition entered Saturday having been separated by just 0.55 points at DCA’s fourth virtual contest, for which scores were published August 30.

Fusion Core continued its strong 2022 season, earning top scores amongst a quartet of ‘A’ Class participants in Saturday’s event and scoring seventh overall, ahead of CIncinnati Tradition and Rogues Hollow Regiment. The New Jersey corps outscored the ‘A’ Class field by 4.70 points.

“I think we threw down,” Nick Caljean said. “I’m really proud of my team; they pushed through some adversity and they threw down, ultimately.”

Second and third place featured two corps whose scores have been within close distance of one another throughout the summer — Skyliners and Govenaires. Skyliners (2nd, 79.800) came out ahead of Govenaires (3rd, 78.850) by just over a point in Saturday’s event.

Columbus Saints rounded out the ‘A’ Class lineup in fourth place with a score of 70.975, breaking 70 points for the first time this season..

“That was a good run,” Columbus Saints drum major Marta Arn said. “I’m really proud of it. We just want to have fun on the field and put on a good show.”

All 12 of Saturday’s competing corps — as well as Friday’s Mini-Corps champion, Star United — are set to perform in Sunday’s season-ending DCA Finals, starting at 5:00 p.m. ET at the Rochester Community Sports Complex.