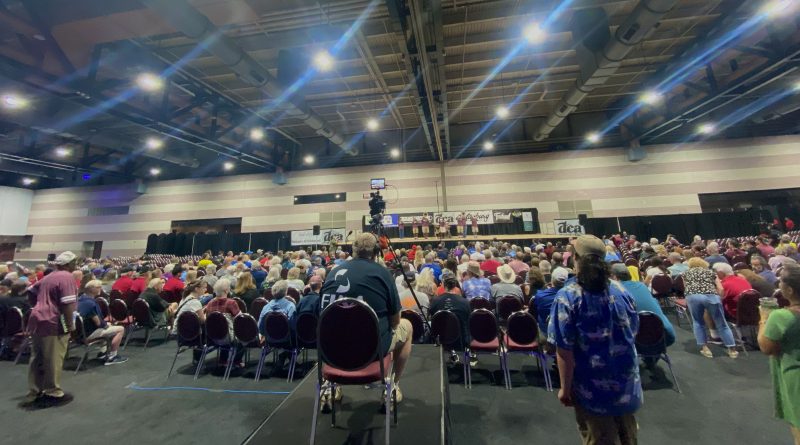 The smell of fresh street food and the sounds of instruments, conversing fans and cheers of approval filled Riverside Convention Center as the city of Rochester came alive Friday night for the opening event of Drum Corps Associates’ 2022 championship weekend.

Buy Tickets to the 2022 DCA Championships in Rochester, New York

Those in attendance at the free event were treated not only to an array of musical and visual performances, but also to local food vendors, serving hot dogs, burgers, Italian sausages and more.

“DCA puts on a fantastic event here,” Star United director Sean Conley said. “It’s great to be back in Rochester. It’s well-supported by the city, and it’s always a ball when we come down here.”

In the night’s highlight event, the highly-popular Mini-Corps competition, Star United took home the top prize with a stunning score of 99.67. Freelancers (96.33) and Brig-Juice (87.00) followed suit in second and third places respectively.

“It’s just great to be back, at all, performing,” Star United director Sean Conley said. “This event is all about having good time, playing music at a high level, and supporting all the other groups.”

In terms of the many displays of talent and pageantry across several unique stages, there was something for everyone at Friday’s event.

Brass soloists and ensembles performed music ranging across several genres, mini-corps packaged the drum corps sound and style into a smaller serving, and percussion category competitors utilized more than half a dozen different instruments in various solo and ensemble performances.

That same stage played host to the night’s resounding final act; the four-hour event concluded with performances by seven “mini-corps” — those being ensembles between five and 25 members whose instrumentation mirrors that of a full competing drum corps — in front of a packed audience in the convention center’s sizable Empire Room.

“It’s always a joy,” Carlson said. “It feels like anybody can put together a mini-corps. It’s a very accessible event, it’s an event that has a low barrier to entry. Everybody enjoys it while we’re here.”

Ultimately, across all performance platforms, the entertainment value, diversity, and fan-friendly nature of the DCA community was on full display at Friday night’s exciting kickoff event.

“it’s just so nice to see so many people from different walks of life, different generations, coming together and performing together, and enjoying each other’s performances,” Carlson said.