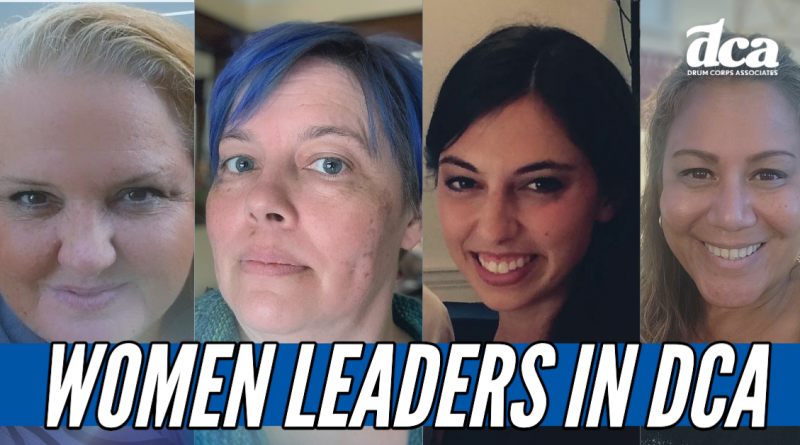 “It was so glamorous to me (growing up); I thought, ‘I have to do that,’” she said. “And then, unfortunately, it wasn’t the experience I was hoping it would be.”

Many people, left with a negative taste in their mouth by an experience, would, understandably, leave that experience behind. Huber felt differently.

She became motivated — motivated to take her negative experiences and eradicate them from the future of the activity with which she’d spent her high school years falling in love.

“I didn’t see any reason why this can’t be a better experience,” said Huber, who now serves as assistant director at Atlanta CV, dedicated to developing an improved drum corps experience for the hundreds of members that come through her corps’ ranks.

Huber’s experience as a performer isn’t uncommon. But, much to the benefit of the marching music community, neither is her decision to go into leadership.

Within Drum Corps Associates, Huber is one of several women leaders in various positions of prominence who are leaving their mark on the present and future of the activity.

And the activity is better for it.

“You can’t have a complete drum corps, or any kind of organization, until everyone is there,” Huber said. “And to me, if you’re in a room, and there are no women, there are no black people, there are no trans people, you’re missing people, it’s just kind of plain and simple.”

DCA recently had the opportunity to receive perspective from those four women, on their experiences, advice, and outlook for an equitable and inclusive future in drum corps:

How did you end up in your current leadership role?

MARINO: “My husband and myself and my best friend and a few other friends that were drum corps buddies started the drum corps. I was a stay at home mom, and I had been marching since I was 10 years old. You know, it just kind of made sense. When you run an organization, of course, it takes up a lot of time, so I was able to focus on the things we needed to get done while being home with the kids and whatnot. So yeah, I ended up being director, and also marching and marching with my family. So, that was fun. That’s how it started.”

MEYER: “So I’m constantly in a leadership role with regard to my day job (as a banker). I just started bringing in some of those skills to help our corps director, (during the pandemic shutdown), financially shore things up, keep people accountable and make sure things were getting taken care of. It was sort of setting a new standard expectation that, this isn’t a hobby, this is a competitive unit that ought to do things the way they need to be done. We ended up winning World Championships my first and second year as assistant director, and the board was very pleased with contributions I was making, and when (the previous director) retired this past October, they appointed me as the executive director.”

HUBER: (After aging out), I joined (my corps’) admin team; I was hired as an intern my very first summer in 2016. I got to see behind the curtain as to why things are the way they are, and how we could change and improve them. And that was really eye-opening.”

“There are so many angles that just simply a member or an outsider doesn’t always consider, so it’s been really great to see from all the angles, board of directors, educators, members, parents, volunteers, alumni, that there are so many facets and perspectives. And then the thing that I think is fun and challenging is how do we take all those perspectives, validate them and create the best version of this core? Yeah, and that’s been really exciting and fun to do.”

MOE: “The director that took us through the bulk of COVID left in December of this year, very abruptly. Nothing terrible happenetd, it was just burnout; it was a rough time to be a director… There were three of us that were appointed as directors in December. We’re sharing the duties to get through this year. But it was not something that I actually pursued. I was a marching member, and then all of a sudden, I turned around, and I was director. I have a great deal of experience in arts administration, and in music education, and I think that that was a part of how I came to be in the job, as well as huge passion for the corps — and the marching arts, but especially the corps. I really believe in the Govenaires.”

How would you describe the importance of representation in drum corps and orginizational leadership?

MARINO: “In some ways, you know, women didn’t come into the mix, especially in DCA, until not long ago. For some drum corps, it was as late as the 1980s. I think that the activity needs to

be well-diversified, and there’ss no reason why a woman shouldn’t be in a leadership position, whether it be a director, or administrator, or a caption head…it’s important for the activity to be diversified like that.”

MEYER: “All the current women that are in leadership roles, somewhere along the way, there was some woman that crossed our paths and showed us, ‘Yeah, I can do that’… I thinkit’s really great, in an activity that has been male-dominated for so long, to see women finally stepping forward and saying, ‘It’s okay if I’m in charge; I know what I’m doing.’”

HUBER: “I think that truly the best organizations have come from so many different perspectives coming together, seeing things differently, contributing differently, and making it everything they can make it to be, because when you have everybody in the room, I think that’s when you get get your best products.”

MOE: “It’s funny, because (Govenaires) have had three women directors in the past 10 years… We’ve had them and we’ll have them and don’t understand why it’s a big deal. But women would be in leadership. We need to have, as always, equal representation in everything — and we should have had it by now. This should not be an amazing thing. But it’s it’s important that we see women in all the roles… We need to see them everywhere.”

What would your advice be for women who hope to hold leadership roles in drum corps in the future?

MARINO: “Trust yourself, trust your voice. Understand that your voice should be heard. Don’t be intimidated, because at the end of the day, we’re all here to support each othe. Surround yourself with people that are willing to hold you up and support you and help you out. Consult with your fellow directors, whether they be male or female, and definitely go for it.”

MOE: “Be strong. Believe in your own voice. Don’t let it get shut down. Sometimes, you have to be loud.”