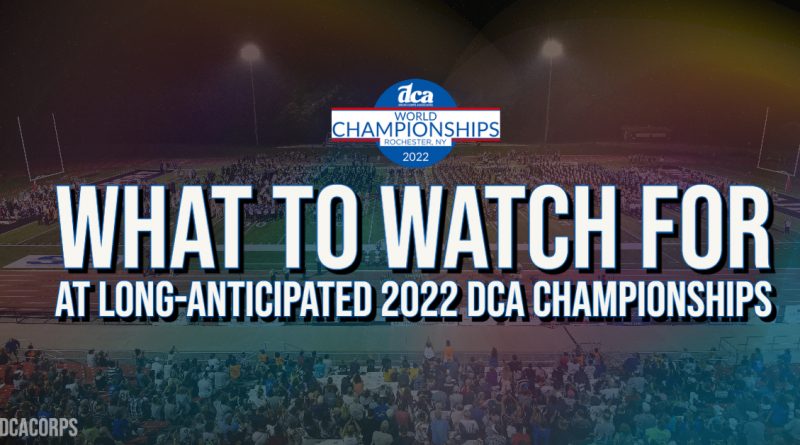 DCA Championships’ long-awaited, triumphant return is right around the corner.

For the first time since 2019, Drum Corps Associates is prepared to host its annual weekend event — in sticking with tradition, centered around the Labor Day holiday — September 2-4 in Rochester, New York.

The DCA Championships will provide a resounding and memorable conclusion to DCA’s 2022 season, which has featured an endless supply of exciting musical moments, visual marvels and competitive attention-grabbers.

Featuring 12 competing drum corps, as well as a litany of special performances across an array of unique platforms, will bring a wealth of entertainment to Rochester’s already-vibrant cultural scene.

As DCA’s championship weekend nears, here’s a full guide of what to expect in upstate New York:

Kicking off in Style | Sept. 2

The growing excitement for DCA Championships will pay immediate dividends with Friday’s weekend kickoff events, all predicated on a festival-like atmosphere for fans and performers to enjoy and celebrate arrival at the final stop of DCA’s summer tour.

Friday of DCA’s championship weekend is set to feature Individual & Ensemble competition and Mini-Corps competition, all free to the public, at the Rochester Convention Center.

The Individual & Ensemble event will feature some of the most musically diverse performances of the summer, with a wide-open list of categories in which participants can showcase their talents. The full list of instrument and movement categories includes, but is not limited to, brass instruments, percussion instruments, dance and more.

Coinciding with DCA’S “I and E” event will be a setlist of exciting “Mini-Corps” performances — mini-corps designation is defined as an ensemble with 5-25 members, featuring brass and percussion instruments that are also approved for full DCA competition.

DCA’s 2022 competitive season comes to an exciting conclusion with events Saturday and Sunday at Rochester Stadium. An already-intriguing summer of competitive results will come to a head with 12 corps competing across three classifications for the honor of DCA World Champion.

The Hawthorne corps, though, has had plenty of close competition this summer in meetings with Reading Buccaneers. Those two meetings have been decided by 0.95 and 0.70 points apiece, both in favor of Caballeros.

Those two ensembles are joined in World Class by Bushwackers and White Sabers. The two last met head-to-head August 27 in Reading, Pennsylvania, where Bushwackers outscored the New York corps by 3.90 points. Reading Buccaneers posted a score of 93.500 at that same event, while Hawthorne Caballeros tallied 93.550 the same night in Seymour, Connecticut.

As of August 23’s virtual competitive event, Atlanta CV and Hurricanes sat atop the quarter of Open Class competitors, separated by just 0.45 points with the advantage favoring Atlanta CV. Hurricanes, however, held leads in total music, as well as music effect.

At that same event, Atlanta CV and Hurricanes were joined by the two other corps who will round out the Open Class lineup in Rochester — Cincinnati Tradition and Rogues Hollow Regiment, the latter of which earned 2021’s ‘A’ Class championship title.

Fusion Core enters the DCA Championships with the top ‘A’ Class score to date, having posted a mark of 80.850, August 27 in Seymour, Connecticut. In its only head-to-head meeting with a fellow ‘A’ Class corps this season, Fusion Core outscored Skyliners by 7.60 points back on July 30 in Williamsport, Pennsylvania.

Skyliners’ latest number of 75.750, earned August 27 in Reading, checks in as the second-highest to date, although Govenaires’ 73.600 earned a week prior in a virtual event isn’t far behind. Columbus Saints, the fourth ‘A’ Class competitor on DCA’s 2022 tour, earned a score of 60.850 in the same virtual competition.

Looking to see an array of memorable DCA performances and the exciting conclusion of the 2022 competitive season? Buy tickets to the DCA Championships at dcacorps.org/tickets.

While the last day of the weekend will be rounded out with DCA Finals competition, it will open with a celebration of history, as a variety of alumni corps take part in the DCA Alumni Spectacular. The special event is scheduled for 10:00 a.m. at the Rochester Community Sports Complex.

Included in Sunday’s alumni spectacular are eight ensembles, including the always popular Skyliners Alumni, and Crusaders Senior, whose junior corps counterpart celebrated its strongest season ever in DCI competition.

DCA’s championship events can also be streamed live via Box 5 Media. Learn more about how to subscribe here.