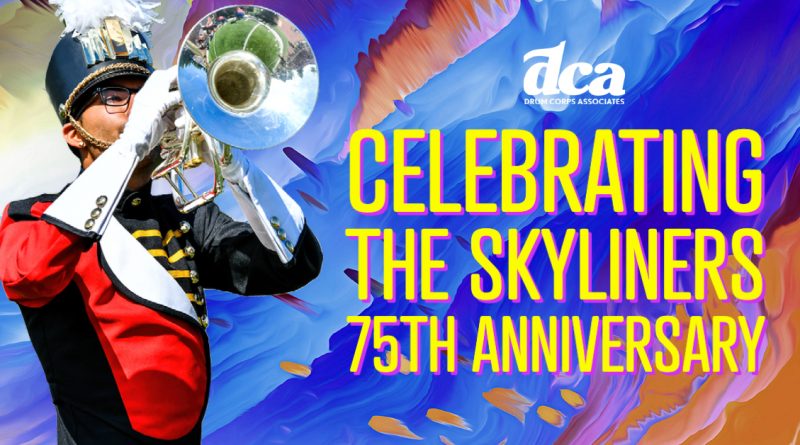 The Skyliners’ 75th anniversary celebration is 77 years in the making.

2020 marked the corps’ diamond anniversary, and plenty of exciting plans were in place to make that summer one to remember. In the wake of the COVID-19 pandemic shutdown, those plans were put on hold.

Now, in 2022, with competitive and in-person drum corps back in full force, Skyliners’ wait has paid off; the corps is excited to celebrate its 75th anniversary in its 77th year, a year rife with excitement and homage to the corps’ rich history.

“We’re anxious to do it,” Skyliners director Jeff Crawford said. “We’ve been waiting so long… We were starting to wonder if we were ever going to do it.”

Unfortunately, Skyliners’ original plans to hold a 75th anniversary banquet were tabled this year after two years of planning and re-planning; ultimately, according to Crawford, the 2022 schedule didn’t work out to pin down an ideal plan.

But that doesn’t mean all of the corps’ celebratory plans are still on hold. According to Crawford, Skyliners’ 2022 production is the same show the corps had planned for its original 2020 anniversary.

The show is titled, “Slaughter,” as a reference to “Slaughter on Tenth Avenue,” the iconic piece from Rodgers and Hart’s 1936 musical, “On Your Toes,” which has outlined much of Skyliners’ history. In total, 11 unique Skyliners productions dating back to the corps’ founding in 1945 have featured the piece; 2022 will be the first since 1995.

In some sense, though, Skyliners’ anniversary is one of bittersweet nature. Crawford made a point to reference late corps president Bob Holton, who passed away in the spring and is unable to take part in Skyliners’ official celebration. His influence on the organization, though, and its ability to reach its celebratory 2022 season, cannot be overstated.

“He was part of the corps in several different capacities throughout his life,” Crawford said. “So, we’re a little bit disappointed that he wasn’t able to see the show. We’re dedicating the season and the show to his memory. So, that’s actually added a little bit of sentiment to it, but it’s also kind of a downer that he’s not going to be with us when we celebrate.”

Ultimately, according to Crawford, members of the corps come and go and turn over from year to year, but the 2022 ensemble’s excitement to honor its organization’s history is at a high.

“They take that responsibility very seriously,” Crawford said. “They get what it means to have been a Skyliner for all these years, but they also understand their responsibility and what it’s going to take to keep the Skyliners going.”