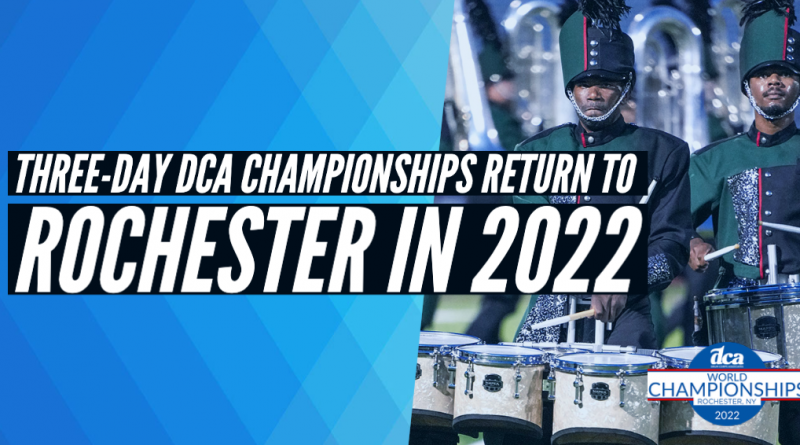 For the first time in three years, Drum Corps Associates live events are back and in-person and that means the highly-anticipated return of the season-ending DCA Championships, set for their usual Labor Day weekend dates.

The three-day event, slated to be held in Rochester, New York, will feature a variety of exciting performance mediums and stages across Friday, Saturday and Sunday of Labor Day weekend.

2022 will mark the first time since 2017 that the DCA Championships were hosted in Rochester — that year, Reading Buccaneers nearly cracked 99 points in Open Class first place, while Cincinnati Tradition took home the A Class title.

As the summer nears, here’s a rundown of everything fans can expect from the DCA Championships, September 2-4.

Purchase tickets to the DCA Championships and coinciding events

The first day of DCA’s championship weekend in Rochester will be full of unique performances, featuring competitive performances under both the “individual and ensemble” and “mini-corps headings.

The mini-corps portion of the day is set to feature eight small ensembles. As for the “I&E” portion of Friday’s event, participants of all instruments can feature their talents in a small-scale setting; registrations are still available to take part in this event.

As a whole, Friday’s events — which are intended to feature a festival-like atmosphere for fans and participants alike — will set the tone for an energetic and celebratory weekend of DCA action.

Saturday, the official DCA competition gets underway in full force.

Set to start at 4 p.m. at the Rochester Sports Complex, 12 drum corps across three competing classes will take the field in World Championship Prelims competition. With Saturday’s event featuring all of the weekend’s competing ensembles, it will serve as the busiest and fullest day of performances on the DCA season.

The season’s final days will be its busiest, and that’s not just because corps will be preparing for their last performance of the summer, with all sights set on bring home the gold.

Then, Sunday evening at 5 p.m., Rochester Sports Complex transforms back into the championship stage, as World, Open and A Class ensembles take the field in World Championship Finals competition, for the right to take home the first in-person DCA title since 2019.

Hawthorne Caballeros and Rogues Hollow Regiment will both be looking to defend titles earned during DCA’s virtual 2021 season.