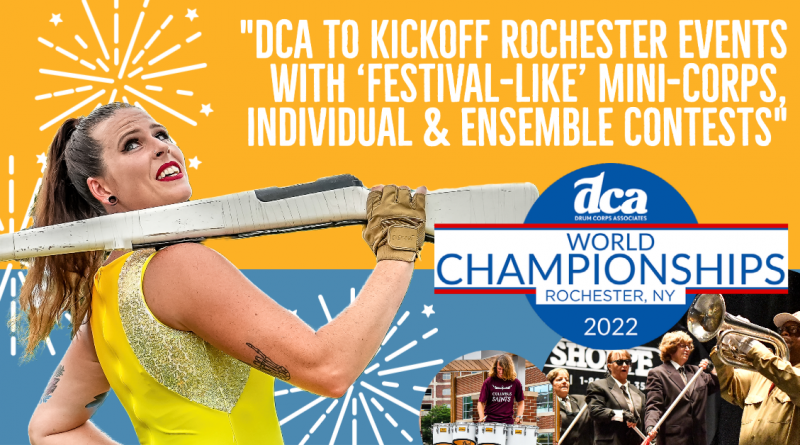 For the first time since 2019, Drum Corps Associates is set to hold its marquee championship events in Rochester, New York. But before the competitive on-field action gets going at the DCA Championships in Rochester, there’s plenty of fun, performance, and even some extra competition in store.

DCA’s 2022 season-ending festivities are set to kick off Friday, September 2, with a joint celebratory event featuring individual and ensemble — or “I&E” for short — competition, as well as a full mini-corps event.

Fans in Rochester, as well as those planning to come from out of town to experience the DCA Championships, are encouraged to come and experience the joy of music in a “festival-like” atmosphere at Friday night’s events.

“We’re working very hard to make it like a street festival, indoors and out,” said Tom Beebe, chairman of DCA’s I&E and Alumni Showcase. “We’ll have food, we’ll have fun, we’ll have all the acts going on… This will be a wonderful way to kick things off in Rochester.”

Held in a centralized location at the Rochester Convention Center, the Individual and Ensemble and Mini-Corps competitions are free to the public.

“What’s nice about Rochester, it’s a drum corps town,” DCA vice president Dick Fischette said. “There’s a lot of people here who maybe won’t go to the big show, but they’ll come to these events for the camaraderie.”

Here’s a quick primer on what’s in store for the two exciting events:

DCA’s individual and ensemble competition features a very low barrier to entry and is one of the most accessible performance opportunities offered to marching performers.

The event is open to participants on any instrument that is currently included on the field in DCA corps’ performances. Current categories for competition include those in the brass, percussion and color guard/dance categories, as well as voice.

Beyond instrumentation, ensemble size is also a variable factor; participants can perform as soloists, duets, trios, or even in groups of more than a dozen performers. These groups can vary in instrumentation, including brass choirs, brass ensembles with percussion accompaniment, mixed percussion ensembles and more.

“This is a golden opportunity for performers to display their skills to their peers, to get an evaluation by a different set of eyes and ears, and to see how they measure up,” Beebe said. “And it’s just flat fun. It’s fun to go up against folks you know in other corps, and see how you measure up against folks you don’t.”

DCA encourages interested participants to register to take part in the competitive and entertaining event. Applications are due by August 19.

Mini-corps have become a mainstay feature of the DCA community, and feature exciting competitive performance opportunities for small ensembles to showcase their talents for an engaged audience and a panel of three adjudicators.

The mini-corps stage is a unique and aptly-designed elevated performance platform — measuring 56 feet wide and 36 feet deep — that allows for smaller ensembles to thrive.

Mini-corps can range anywhere from five to 25 members, and generally tend to feature brass performers, and in some cases, one or two percussionists. Groups may also feature a drum major or conductor, who does not count toward the member limit. Ensembles must apply prior to July 1 and complete music permissions prior to August 1 in order to participate.

“It’s been very competitive over the years,” Fischette noted. “We’re hoping it remains that way.”