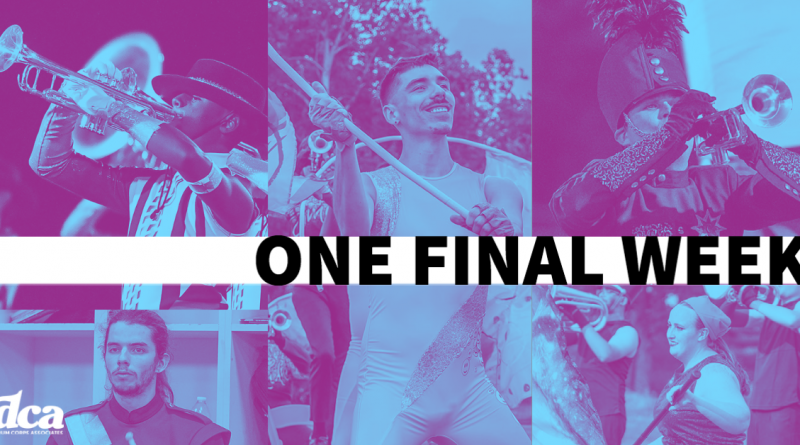 It all comes down to one final weekend.

The 2021 DCA summer season is heading toward its final event, the summer’s culminating weekend, with the DCA Championships.

Subscribe to watch the DCA Championships live at watch.dcacorps.org .

Here’s everything you need to watch for throughout DCA Championships weekend.

Celebrating their 75th anniversary this year, Hawthorne Caballeros be one of several groups to feature an alumni corps.

The mini and alumni corps event will include 10 groups in total in exhibition, with the full performance listing featuring:

As part of Sunday’s events, DCA will honor the many lives lost during the past year and a half, amidst the COVID-19 pandemic.

The memorial presentation will be presented by longtime DCA announcer Fran Haring.

In Haring’s words, numerous individuals who sadly passed away in the past year and a half, “have made tremendous contributions, not only to their individual drum corps, but also to DCA.”

Sunday’s live event, starting at 7 PM ET, will feature 12 corps’ final performances of the summer, all vying for the title of DCA Open and ‘A’ Class champion.

The competition has been red-hot coming down the stretch, with Hawthorne Caballeros currently in position to take home the Open Class crown. Caballeros earned a top score of 89.65 at the most recent competitive event, with Atlanta CV just a point behind.

With plenty of other intriguing competitive storylines up and down the standings — including three different caption score winners in the final week of pre-championships competitive action.

The full list of competing corps is as follows: