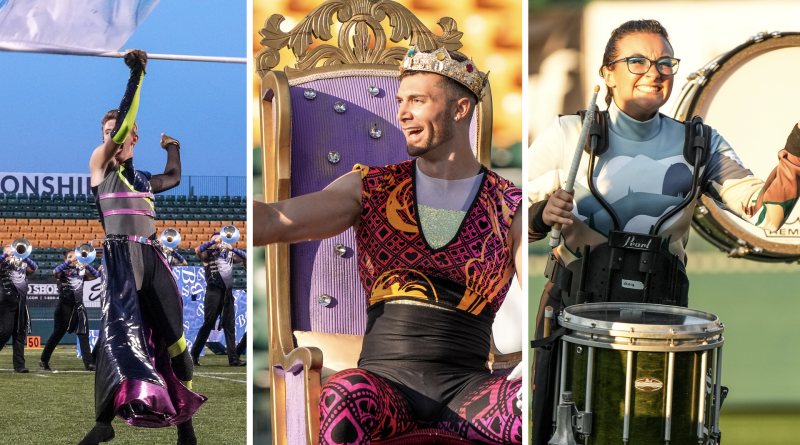 The 2022 Drum Corps Associates summer season came to an exciting and resounding finish Sunday night, as rainy conditions held off and a dozen bright competitive drum corps performances shined through, with three corps ultimately earning the title of 2022 World Champion in their respective classifications.

DCA’s Finals event, held at the Rochester Community Sports Complex, featured World, Open and ‘A’ Class competition, with each division including four competing corps, all of which advanced from Saturday’s Prelims event.

After a slew of close finishes up and down the leaderboard in Prelims, ultimately, races to the finish line were won by Reading Buccaneers, Hurricanes and Fusion Core.

Drum Corps Associates congratulates all of its participating corps on completing a successful season, and expresses its utmost gratitude to all who made the summer season possible after two full summers away from in-person events.

Reading Buccaneers came out atop the full DCA leaderboard and won DCA’s first ever World-Class gold medal, earning a top score of 97.600 while taking home caption awards in brass and effect.

Buccaneers’ 2022 title comes in the corps’ first season of performances since 2019 — when the corps also took home a gold medal — and its 18th all-time championship title.

“Wee worked really hard all season long for this,” Buccaneers drum major Andrea Gwyn said. “But (this championship) is like the icing on the cake; this isn’t why we do this. The camaraderie — that to us is what doing a season’s worth of drum corps is all about. (Winning is) very nice, but it’s not everything.”

The Reading corps ultimately emerged from a hotly-contested season-long race with Hawthorne Caballeros. In three meetings prior to Sunday — including Saturday’s Prelims — the two corps were never separated by more than a point. Saturday had marked Buccaneers’ first head-to-head win over the Hawthorne corps.

“At the end of the day, the whole drum corps came together,” Buccaneers member Michael Antonacci said. “Whatever challenge we faced, we just took it head on and we kept pushing. Everything we’ve overcome, that’s the best part, looking back on all of it..”

While Caballeros (2nd, 96.725) finished just 0.875 points behind Buccaneers, the New Jersey corps’ season was one for the record books; the corps followed up its 2021 championship with a third-consecutive medalist position and its highest final score in nearly 20 years. Hawthorne Caballeros won caption awards in color guard, percussion, and visual. Caballeros also received the night’s overarching honors for best honor guard and best showmanship, which went to the corps’ flugel horn soloist.

Bushwackers came in third in World Class with a final score of 94.600, keeping its lead over White Sabers (4th, 90.800) intact from Prelims. White Sabers’ Ben Chafee was also awarded Director of the Year.

Hurricanes earned first-place status at a DCA championship event for the first time since 1981, and earned its highest final score since 2012. Hurricanes’ overall placement of fifth also marks the corps’ highest competitive ranking since that same 2012 season.

“The corps had an awesome run,” Hurricanes director Dave Pyrch said. “Definitely the best run of the year. They’re pumped, we’re pumped up; they showed up off the bus this morning just ready to go.”

Atlanta CV’s second-place finish and score of 87.750 marks a resounding close to the corps’ celebratory 25th anniversary year. The Atlanta corps earned the caption awards for percussion, and fended off DCA’s third- and fourth-place competitors by a strong margin of 4.40. Atlanta CV director Russ Thompson was voted Open Class Director of the Year.

Fusion Core wrapped up an impressive competitive season Sunday night, earning an ‘A’ Class world championship title and outscoring a pair of Open Class corps in the process. The New Jersey corps swept ‘A’ Class caption awards and earned a class-high score of 85.725.

“This was one of the best feelings I’ve had walking off the field,” Fusion Core drum major Kyle DeFranco said. “We had a really great run tonight; everybody feels amazing about it.”

Sunday’s victory marks Fusion Core’s first time earning a DCA gold medal since 2010. According to DeFranco, Sunday’s performance was the culmination of a challenging yet rewarding summer.

“It’s been a good season,” DeFranco said. “We were a little bit nervous in the beginning of the season, but as the season progressed and the corps, the design, everything came together, the product we had out tonight was just incredible.”

A close race between Skyliners and Govenaires — the two were separated by just 0.95 points in Saturday’s Prelims — concluded with Skyliners (2nd, 80.950) coming out ahead Sunday.

The New York corps — which didn’t compete in 2021’s virtual season — outdid its final score from 2019’s ‘A’ Class final leaderboard, and matched its final placement from that season. Govenaires’ final score of 78.975 in third place was the Minnesota corps’ best since 2018.

Rounding out the ‘A’ Class leaderboard, Columbus Saints posted a final score of 71.675 in just its fourth season competing among the DCA ranks. Columbus Saints’ Finals output made history, marking its first time breaking 70 points at DCA Finals and outdoing its previous all-time high final score by greater than three points. Columbus Saints director Le Ron Carlton was also voted ‘A’ Class Director of the Year.

Sunday’s event marks the conclusion of Drum Corps Associates’ 2022 season. DCA looks forward to the organization’s bright future and the summer of 2023!