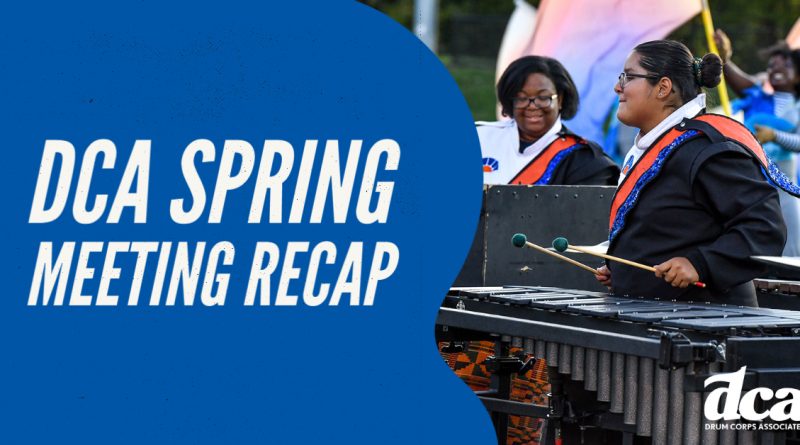 Drum Corps Associates held their Annual Spring Meeting last weekend which proved to be successful and highly productive. The meeting was held at American Legion Post 199 in Hawthorne, New Jersey and hosted by the Hawthorne Caballeros who are celebrating their 75th anniversary in 2021. The meeting was attended by DCA corps directors, DCA Executive Board members, and DCA staff. The meeting was held virtually as well as in person so that all member corps could attend. All safety measures were in place with temperature checks, social distancing and masks were worn when required.

DCA President John Carr opened the meeting by welcoming Rogues Hollow Regiment as a competing corps this season in Class A. President Carr then spoke about branding and accessibility, and its importance to DCA to reach out to potential new members, ways to help grow the DCA family of drum corps, and exploring better ways to utilize the DCA website for the 2022 and 2023 seasons and beyond.

Technology Administrator, Le Ron Carlton spoke about the new website design and the TEAMS app to make it easier and faster for the directors to get any information they may need for their corps. A discussion was held citing the DCA Philosophy for the upcoming 2021 virtual season in making their shows entertaining and to have fun while performing to the fans watching. DCA photographer, Chris Maher announced that DCA photographers Raymond Fudge, Larry Eckert, and himself will be visiting the corps and will be taking pictures and doing articles on them as they perform their virtual shows, Larry and Raymond will cover the Northeast corps and Chris will cover the South, Midwest, and Northeast corps. DCA Store Manager, Pat Bocker, gave an update regarding the reopening of the store coming soon and that the 2021 new virtual tee shirts can be individually ordered on line and to watch for that announcement also coming soon.

Since there was no Rules Congress this year an amendment was made to the current Rule Book to accommodate the upcoming virtual season. The judging panels will remain at seven in number for this virtual season as well as Championships. All rules changes were passed by the voting members. DCA Vice President, Dick Fischette, discussed the virtual schedule for the upcoming season and how it will work. The 2021 schedule will be announced in the next two months once all corps have signed into the shows. This year all alumni as well as mini corps are included in these weekly shows.

Judge Coordinator, John Kreitzer, informed the directors that ALL DCA judges were given a copy of the DCA Philosophy with no changes made on how the virtual shows are to be judged. Each corps will have their own cameras to use in recording their shows to be judged. John discussed ways to make their shows better and to use the second camera for flag or weapon features, drum features, solo or ensemble features, etc. DCA Caption heads, Marty Griffin, Tony Smith, and Rich Guillen were in attendance to answer any questions the directors had. Tim and Robin Snyder from Box5MediaTV were on hand to discuss how to use their cameras to make their shows more effective. They also pointed out things not to do so that corps can get the full credit for their performance. Incoming Business Manager, Larry Carbonell, reported on retaining current show sponsors and reaching out to potential new sponsors.

DCA Treasurer Scott Snell, discussed Competition Suite and how it will work this season. Scott also discussed the budget and ticket subscription sales for the upcoming season. President Carr stated that all CDC, Federal, State, and local guidelines must be adhered to and executed for the safety of all performers, staff, and volunteers. Dick Eschenmann, DCA Championship Chair, led the competitive corps through the order of appearance draw which will be posted as soon as all participating units have signed up.

Drum Corps Associates deserves much credit for bringing back competitive drum corps to all its fans as well as the corps members and staffs so that they can watch from home and enjoy a season of competitive DCA drum corps. PLEASE SUPPORT DCA and buy a subscription. Your support will help make this 2021 season a success! Go to www.dcacorps.org for more information. After the changes that the pandemic has made in all our lives, it is rewarding to have drum corps back in our lives. So this year, sit back and enjoy DCA competitive drum corps at its finest.