The Drum Corps Associate’s summer tour rolls into Lackawana County, Pennsylvania as eight of DCA’s finest corps will be in competition on Saturday, July 29, 2017. This event has been a long standing one each year on the DCA tour and before last year was held in Scranton. For many years this show was also the American Legion National Championship. This year the American Legion will once again be co-sponsoring this competition along with DCA and the show is now titled the Parade of Champions. You will want to arrive early as the opening ceremonies promise to be impressive to watch. The American Legion Honor Guard will be joined by an Honor Guard from each corps as we salute our Country with a 7:00pm start time.

The lineup for the show includes the Skyliners, Sunrisers, White Sabers, Bushwackers, Reading Buccaneers, Fusion Core, Hawthorne Caballeros, and the defending DCA World Champions, Cadets 2. Six of the eight corps in this competition have each won the DCA World Championship title in their past history. At the end of the show fans will be treated to an exhibition by the Tri-Valley Brass before the evening concludes with a full corps Olympic style retreat as the scores are announced. 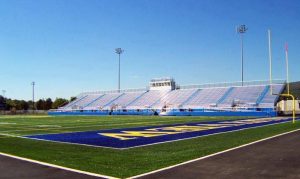 The big show will be held at Valley View High School, 931 Main Street in Peckville, PA, which is just a very short ride north of Scranton. The Peckville stadium is the most fan friendly you’ll find. Drum corps in your face as the stadium has no track! This is a show not to miss so be sure to circle this date on your calendar! This show is very important to each corps as they set up for the final stretch leading into the DCA World Championships in Rochester, NY over Labor Day Weekend, September 1-3. 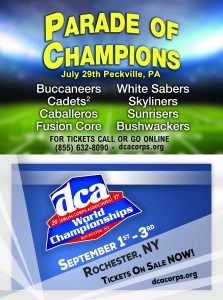