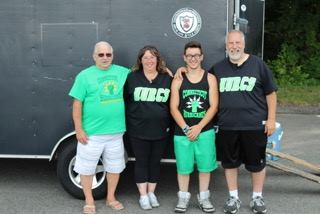 In today’s changing times it is very encouraging to see that family ties to our drum corps activity still exist. Many corps have members whose family roots go way back. One such family is the Staffieri Family from the Connecticut Hurricanes.

Danny Staffieri joined the Hurricanes in 1989 working on the equipment truck and moved to the cymbal line in 1991, then horn line in 1992 as a baritone player, and then switched to tuba from 2007 thru 2013. He went on to join the management team after his marching days were done and is currently the Operations Manager for the corps. Danny was named Hurricane of The Year in 1994 and 2005 and has been the recipient of the Director’s Award in 2012 and voted into the Hurricanes’ Hall of Fame in 2013. When asked why he joined the Hurricanes Danny stated, “Because I got tired of watching Dondi march!!” Dondi, was his girlfriend at the time. Another drum corps marriage took place in 1993 when Danny and Dondi tied the knot.

Dondi joined the corps in 1987 as a member of the color guard, the front percussion ensemble in 1997 thru 2002. Her reason for joining the corps was to march with her father Butch Verdi. After her marching days were over in 2002 she joined the management team and is currently the Transportation Coordinator for the corps. During her career with the Hurricanes Dondi has been named Most Improved Pit Player in 1997, and voted into the Hurricane Hall of Fame in 2014. When asked if drum corps has benefited her family in any way her response was, “It has made us closer as a family!!”

Nicholas Staffieri, son of Danny and Dondi, was a drum corps baby and joined the corps in 2013 as a member of the Honor Guard. He moved to the front percussion ensemble in 2015 where he is still playing. When asked how the drum corps activity has benefited him, his response was, “I’ve met so many people that have impacted my life.” To go one better, I asked him why he does this activity and his response was, “I bleed green and want to carry on the family tradition.” That comment is what this activity needs from our younger members to keep it alive and well.

Butch Verdi is Dondi’s father and joined the Hurricanes in 1972 as a member of the Honor Guard before switching to the color guard in 1973 thru 1976, then went into the horn line playing soprano from 1977 thru 1997. He was a member of the 1981 DCA World Championship corps and was part of many award winning contests. Butch joined the corps because he wanted to be with his friends. When asked how the activity has changed since back in the day, his answer was, “Completely different styles of shows and no more high stepping!” Butch also stated that the drum corps activity “Has kept my family close together.”

Cheryl Curran is Dondi’s cousin and joined the color guard in 1991 because it sparked her interest. Cheryl had family members already marching in the corps so she fit in easily. She was one of the color guard captains from 1998-2002 and also in 2004 before joining the management team as Recruiting Coordinator. She was named Most Improved Color Guard member in 1991. Cheryl met her husband John Curran Jr., who was also a member of the Hurricanes, in 1991 and they will celebrate twenty-two years of marriage in September. Together they have taught at various high school marching band programs in Connecticut and New York. They have a five year old son, Alexander, who loves to go and watch the drum corps perform. Another Hurricane in the future?

John Curran Jr. joined the Hurricanes in 1990 as a cymbal player before switching to the baritone section until his marching ended in 2007. He also drove the equipment trucks for five years during the 1990’s. John was named Most Improved Horn Player in 1991. He chose the Hurricanes because it was the corps where his father marched for many years.

The final family member of this group would need an article all by himself and that is John “Cupcakes” Curran. Since his start of his drum corps life in 1957 with the Cambridge Caballeros from Massachusetts and going into the 2016 season, he will have FIFTY NINE years of drum corps service! John joined the Hurricanes in September of 1973 starting his forty plus years with the corps playing lead soprano. He commuted from Boston to be with the corps before moving to Connecticut in 1977.

He went on lead baritone at the asking of horn instructor Ray Fallon in 1979 before switching back to soprano. John also taught marching in the late 80’s while still playing in the line and has helped with the souvenir table, driven the equipment trucks, and helped line practice fields in the early morning hours. Cakes marched through the 2006 season and then he resumed his role as a marching instructor, as his marching days ended.

John was voted into the Hurricane Hall of Fame in 1976 and into the World Drum Corps Hall of Fame in 2002 as an associate member. John also played with three other junior corps and many other Alumni Corps during his career and is still playing to this day. His health issues have slowed him down greatly but that has not stopped his love for the activity. Recently at the Grand Prix show, John came out wheelchair and all to perform with the New York Skyliners Alumni Corps.

Brenda Curran joined the Hurricanes in 1975 as a support person setting up tables for drinks and snacks for the corps. She worked the souvenir table for several years before joining the color guard as one of the first female members allowed in. Brenda started making flags for the guard as well as accessory pieces for the uniforms whenever asked. After the 1982 season, Brenda started teaching the color guard and continued as an instructor, sewing, and doing souvenirs through the 1987 season when she retired.

Ladies and gentlemen, when the math is all added up, you have One Hundred and Eighty Two years of drum corps service from this family !!!