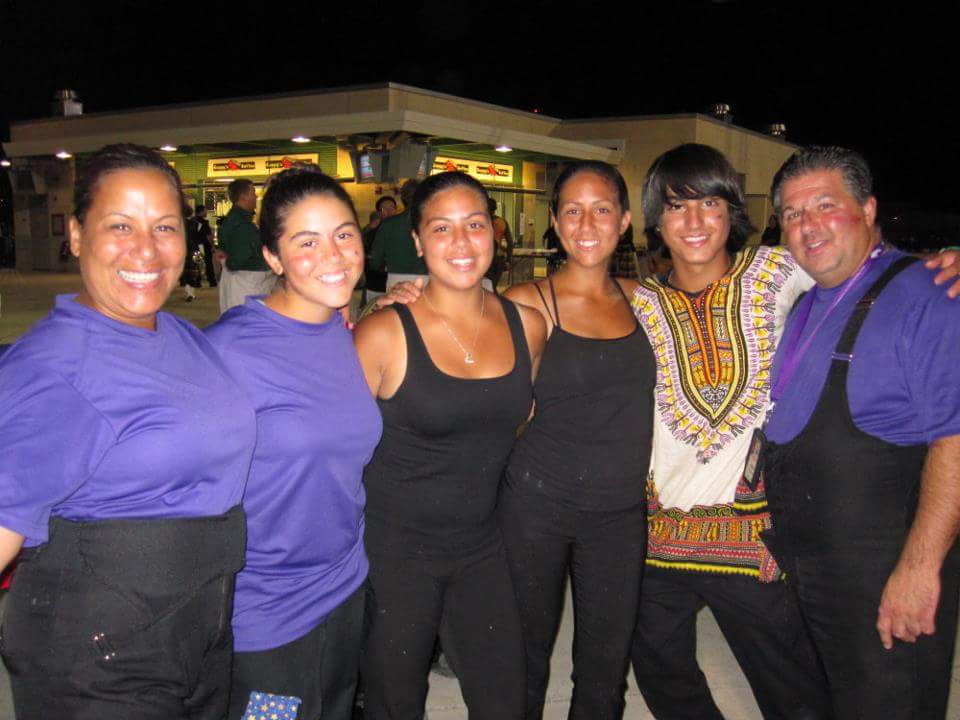 There is an old expression that goes “the family that plays together, stays together”. That can be said about sports, church activities, scouts, social groups, and of course drum corps. One drum corps family that highlights this is the Marino family from Fusion Core.

Ralph’s drum corps experience is widespread from Los Federales, Bill’s Boys, and New Image/Sound of Long Island, West Sayville Golden Eagles, Skyliners Alumni, Skyliners field corps, and finally Fusion Core from 2007 to the present. Ralph has two uncles who were in the New York Skyliners, while his brother Tommy and father Angelo played with Ralph in Los Federales and Bill’s Boys. Ralph also serves as Administrator for Fusion Core.

Holly’s drum corps adventure started with St. Ignatius Girls in 1976 and then on to New Image/ Sound of Long Island, Bill’s Boys, west Sayville Golden Eagles, Skyliners Alumni, Skyliners field corps, and finally Fusion Core where she serves as the Executive Director for the corps.

Ralph and Holly both joined DCA because to both of them it was about family. It was a place to enjoy their hobby but also to find a family atmosphere. They both found their niche and they also found each other and together they have built a strong family structure on and off the field. DCA has benefited the Marino family in EVERY way. DCA has given them the opportunity to share their passion alongside their kids and not from the stands which is the BEST way to do drum corps. To both of them, DCA has evolved greatly over the past ten years and started under the leadership of Gil Silva. He put together a hard working team with the vision and fortitude to take DCA to its next level. DCA was attracting a lot more young people for a variety of reasons and they knew that in order to keep DCA alive, these young people were our life line. They made an alliance in a sense with DCI and together they worked to build a relationship in which DCA was able to learn about the things that attract the youth and DCI was able to learn, from an insider’s view, more about DCA.

The Marino clan also has a few thoughts about being involved in drum corps as a family. Toni-Anne stated that “even though I am no longer marching, I know my heart will always be there and all of my greatest memories with the family have taken place in drum corps, as well as some of my greatest relationships with humans”. Samantha says “Just as Mom and Dad met in drum corps, I met my fiancé in Fusion in 2007 and we are getting married this year 2016″. “My favorite years were when I was able to march with all of my siblings along with my parents”. “Christian, Nicole, and I are all mallet players and we have a great connection when we play together and drum corps made us who we are today”. Nicole says “I have met some of the most amazing people since I starting marching in Fusion back in 2007. Not only did I have amazing friends by my side to spend my summer with, I had my entire family!” “I have always had a strong bond with my parents and siblings, but spending countless hours together doing an activity that we love has brought us so much closer.” Christian summed it all up by stating, “Being able to combine an activity like drum corps with my favorite people on this planet is truly priceless. Drum corps has been such a key component to my life that I can say with complete honesty that I don’t even know what my life would be without it.”

When not doing drum corps, the Marino loves spending time at their second home, Disney World. They also enjoy family movie night at home and karaoke at home.