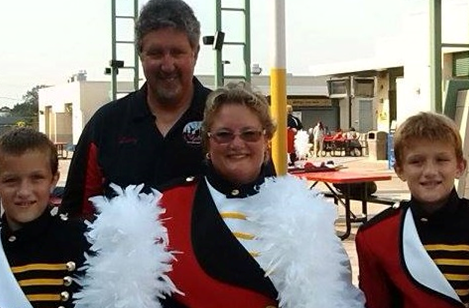 Larry Carbonell first became involved in drum corps in 1969 as a tenor drummer for the Stafford Crusaders from Stafford Springs, Ct. He has marched with several corps including the Skyliners, Sunrisers, Centurions, and the Keesler Blue Knights. His teaching and other experiences include being a part of the Sunrisers,Core, Centurions, Belville Soundations, and the Wind Gap Blue Eagle Alumni.

Larry’s wife Stephanie is the Assistant Director for the Skyliners and works with the members to ensure they have proper fitting uniforms. In addition, she handles all of the merchandise and is the Assistant Drum Major on the competition field. Twin sons Connor and Logan, age 11, marched in the American Section for the corps last summer and will be returning again this season. The boys have been in the honor guard since age six when they marched with the Centurions. Daughters Patricia and Christina marched in the Sunrisers color guard in 2014 when at ages 11 and 13 respectively.

Larry believes that from a performance level, DCA has moved the bar up considerably over the past several years. Over his career corps like Fusion, the Sunrisers, and the Skyliners have all had a family atmosphere that he is continuing as Director of the Skyliners. He wants to keep that atmosphere alive by involving his own family in an activity he has loved all his life. When members work together over a season a tremendous bond is built among the members and a NEW family is created.

The ALL-AGE aspect of DCA really promotes this. It is possible to see a 15 year old horn player marching alongside a 40 year old horn player and each treating the other like family. Larry does drum corpsonly for the roar of the crowd, but to see the smiles along with the tears on the members faces as they troop the stands at the end of their performance. Not only does the crowd get to enjoy their show, the members now have this drum corps activity in their blood and in their hearts.

Check this out for a family tree of drum corps. Larry’s dad was a lifelong participant and teacher in the Fife and Drum Corps activity. Starting as a child, he later was inducted into the New York State Fife and Drum Association Hall of Fame in 1997 as a snare drummer. His father AND grandfather were drummers with the Royal Typewriter fife and Drum Corps from Hartford, Ct going back to the 1920’s! His mother, Theresa marched in the cymbal line for St. Peters Drum Corps in the 1990’s. Brothers Wayne and Dan both have drum corps blood in them as well as an aunt and uncle. Add up all their years of involvement in the drum corps activity and you can understand why Larry Carbonell feels the way he does about our activity of drum corps.