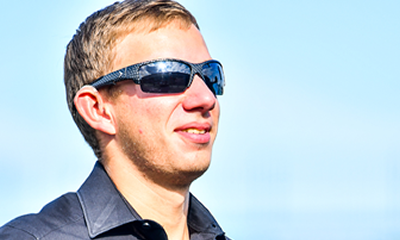 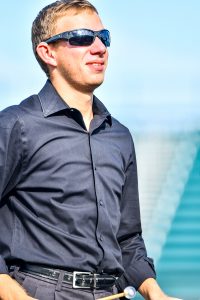 Almost every day every one of us has problems to solve, projects to finish on time or obstacles to conquer or tear down. Imagine in our activity of drum corps that you are a member of a front end ensemble and you are aware that someday you become totally deaf. Meet Sidney Mautte of the Connecticut Hurricanes.

Sidney was born with a slight hearing defect in one ear. Two months later his parents, Virginia and Sidney, received the diagnoses from his doctor. Sidney was diagnosed with moderate to severe bilateral hearing loss due to enlarged vestibular aqueducts. There is no cure for this condition and it is degenerative. He has experienced three major drops in hearing over the years and through the blessings of modern technology he has been able to be mainstreamed. Sidney knows he has the loss but only asks to be accommodated for the ability to hear. When he joined the Hurricanes, he kept his condition private as only the corps director and his head pit instructor knew as he just desired to be a part of the team. Right now Sid is about seventy five percent deaf and at some point down the road he will become totally deaf. In preparation for this he is starting American Sign Language training this year. He is a candidate for cochlear transplants but with the changes in technology waiting is best.

Sid is seventeen years old and is a junior at Lyman Hall High School in Wallingford, Connecticut. He is a front end ensemble member in the marching band and has been since his freshman year. This was his first year with the Hurricanes playing in the pit. This was an opportunity to develop his passion in mallet instruments, adjust to change and flexibility and develop his musicality. He learns his musical parts from lots of practice and memorization. Practice at home involves a five octave practice pad and he memorizes what goes where. His team practices are centered on vibration and visual cues. Playing vibraphone and glock has helped his personal growth and has him recovering more quickly in his playing talents. Sid started playing music in the fourth grade as a percussionist playing bass drum, snare and cymbals. In middle school he played in the jazz band, marching and concert bands. In high school he started out as an auxiliary member in the pit as his desire to improve moved him into mallet instruments during his sophomore year. He is also a member of the concert and winter percussion. In concert band he plays marimba, tubular bells and when a tuner is available he can play timpani.

Most of his peers accept him with his disability and help him along the way. Naturally, there are those who don’t and Sid has had to deal with a lot of immature treatment. His freshman year of high school was very difficult for him as well as his parents. The school leadership has been great with their help and this year he is co-captain in his section and the team is responding more positively. Sid has a couple of outlets dealing with his handicap but music is his passion. He likes to study hard and carries a 3.8 grade average in school. When not doing band or drum corps Sid enjoys cooking especially making and trying sauces. This past week he took first place at the Durham Fair for his culinary talents! He loves superhero movies and reading. He participated in cross country his first two years in high school but decided he needed extra time for his studies this year as he selected harder level courses to take. Sid also loves to volunteer and spent over sixty hours this past summer helping with masters Manna which is the local food and clothing pantry.

He has still not found his major desire as to what to do after high school. His heart keeps taking him back to music therapy as he wants to give back to those that helped him. Sidney Mautte is an excellent example of someone who is overcoming challenges in a positive manner and not letting this handicap deter him in living his life to the fullest. Music, doing volunteer work and being a very successful student has helped him along the way. Sid is just one of many stories of hearing about people who have overcome handicaps and gone on to lead a successful life. All the best to this very energetic and talented young man.