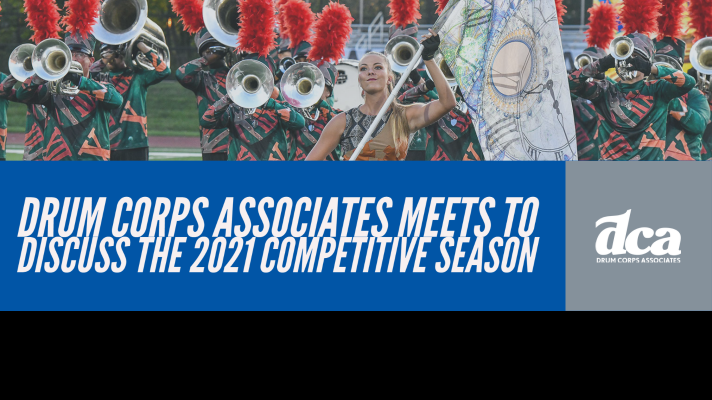 Last weekend DCA held a directors meeting to discuss plans for 2021. The meeting was held at American Legion Post 199 in Hawthorne New Jersey and was hosted by the Hawthorne Caballeros. All safety measures were in place following Covid-19 regulations as temperature checks were taken before entering the building, masks were worn and social distancing procedures were in place for all those in attendance. DCA President John Carr presided over the meeting where several DCA member corps
directors were present, while the remaining directors logged into the meeting via the Zoom app.

The purpose of the meeting was to explore numerous options on how DCA corps can perform on the competition field in a safe manner. Whether a live competition, a virtual format, or a hybrid version, DCA is intent on giving drum corps fans the DCA brand of drum corps in 2021. DCA still plans on having the DCA Championships live in Williamsport Pennsylvania over Labor Day weekend. Many options, with SAFETY being the primary objective, were discussed with the corps as well as securing practice sites and venues to hold DCA competitions. The DCA 2021 show schedule and options were also discussed.

Tim Snyder from Box 5 Media discussed the camera and microphone options if the decision is made to include a virtual option for the 2021 season. Tim discussed with the corps directors different elements of
designing shows for the screen verses live performances. Economic and travel issues were also discussed with safety for everyone being the top priority. Each corps was reminded to have a medical person on board to oversee any medical issues that may arise and to assist with enforcing the Covid-19 guidelines and state and federal mandates.

DCA Judging Coordinator John Kreitzer, along with the DCA Caption Heads, discussed a number of considerations on how the judges can judge a virtual show versus a live show. If, for example, in the event there will be no critique, the directors will have the opportunity to set up a call with the judge(s) to discuss their questions and concerns regarding that show’s performance.

Today’s meeting was just the start of many more meetings planned over the next few months. The virus concerns will dictate as to how all of this plays out and with it the different possibilities that may come for the 2021 drum corps season. President Carr urged the directors to go back to their admin teams & show designers and explore ways to prepare for the different performance options discussed during the meeting.

At the annual DCA meeting in December, which is still scheduled to be held in Williamsport, the final plan and rules will be presented and considered. Safety for ALL, performers, staff, volunteers and fans, remains the Number One objective for DCA.

And, DON’T FORGET that on Saturday, October 3rd from 8-10 p.m. the, ” WE ARE DCA “, a Live Stream Event will be shown via Face Book/YouTube and is FREE of charge. Donations will be accepted during the event to assist DCA and their member corps prepare for 2021.