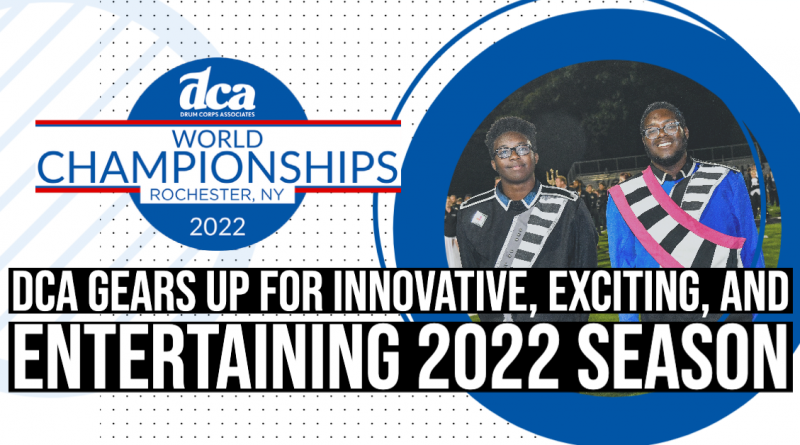 Drum Corps Associates is back in full force.

Starting June 25 and running through the weekend of September 4, the revamped DCA experience will be back in its entirety for the first time since 2019, with more than a dozen live events throughout the eastern United States, ranging from Connecticut to Ohio.

The DCA activity is for fans and performers of all ages and provides life-changing opportunities for all interested to put their abilities on display and create an incredible musical and visual marching arts performance.

Purchase Tickets to a 2022 DCA event near you

With three years since its last set of live events, the Drum Corps Associates community has learned plenty about its members, its activity and the world in which it operates. As such, there’s plenty of new, improved, and adapted plans in store for the summer of 2022.

DCA’s first in-stadium, competitive event is the Barnum Festival, scheduled for June 25 in Bridgeport, Connecticut. From there, the month of July will welcome back some of the most prominent shows in the history of drum corps, each positioned on a Saturday evening, with corps headed to Grand Prix in Clifton (N.J.), Landisville (Pa.), and the DCA mid-season regional in Williamsport (Pa.), where fans can watch drum corps from both the Northeast and the Midwest regions of the country.

The DCA schedule ramps up into August — after a standalone Kingston (N.Y.) event August 6 and a break the weekend of August 13, four unique events in New Jersey, Ohio, Pennsylvania, Connecticut are slated to round out the month of August over the course of two weekends.

“We’re ecstatic to be safely returning to stadiums this summer,” DCA president John Carr said. “DCA is thankful to have many passionate community audiences, and we’re very excited to have both veteran and brand-new fans back in the stands.”

In the summer of 2021, DCA found significant success with a fully-virtual summer competitive season; in their own rehearsal space, corps recorded their own individual performances, to be streamed in live weekly events by Box5 Media.

As the drum corps activity continues to safely re-emerge from the COVID-19 pandemic and the summer of 2022 provides more opportunities for safely executed live events, DCA — in recognition of the positive fan experience provided in 2021 — will be incorporating principles of its 2021 virtual offering into the full 2022 season.

Purchase Tickets to a 2022 DCA event near you

DCA’s 2022 schedule offers a unique mix of events: live shows, some live streamed and virtual opportunities for member corps who find travel prohibitive as they ramp out of the effects from the Pandemic.

“We were absolutely thrilled with the digital offering presented by Box5 Media in 2021,” Carr said. “This summer’s hybrid approach will allow DCA to provide more opportunities for DCA corps throughout the country the compete as a DCA member corps.”

Although the virtual uploads will not be available for the public viewing, corps’ uploaded performances will be critiqued by DCA judges and their score will be posted on the DCA website under Virtual Contests.

“By offering corps these virtual opportunities, more corps can participate and compete as they rebuild their reserves and capital which were depleted during the pandemic,” Carr said. “This is a step in the right direction for DCA as it rebuilds its brand and expands its base to more regions of the country. The hope for 2023 is to make all DCA shows, live and virtual, available for our fans”.

DCA and their partner Box5 Media is offering a live stream package for their fans who cannot make it to a DCA show or where travel may be prohibitive so that fans can experience DCA competitive drum corps in 2022.

What’s new for the 2022 season? DCA is introducing three unique divisions of competition — Class A, Open Class and World Class. This is a departure from the recent system of two divisions, Class A and Open Class.

Participating corps will be placed into these three divisions based on a set of baseline member-count minimums — 26-60 for Class A, 61-85 for Open Class and 86 128 for World Class. If a corps’ total number of members falls above one of these three lines, said corps will compete in that division.

Corps will have the choice to move up to within the divisional structure but cannot move down to a division below their given size threshold.

“With the creation of a third division, we hope to allow corps of all sizes the opportunity to achieve their fullest potential”. “Creating accessible performance opportunities is a high priority for DCA, and we hope our three divisions will open doors for all of our participating drum corps,” said President John Carr.

Drum Corps Associates invites fans to get involved in its safe and highly-anticipated return to the field in 2022 by purchasing tickets to one of its several live events — including DCA Championships in Rochester, September 2-4 — as well as the livestreaming package through Box5 Media.