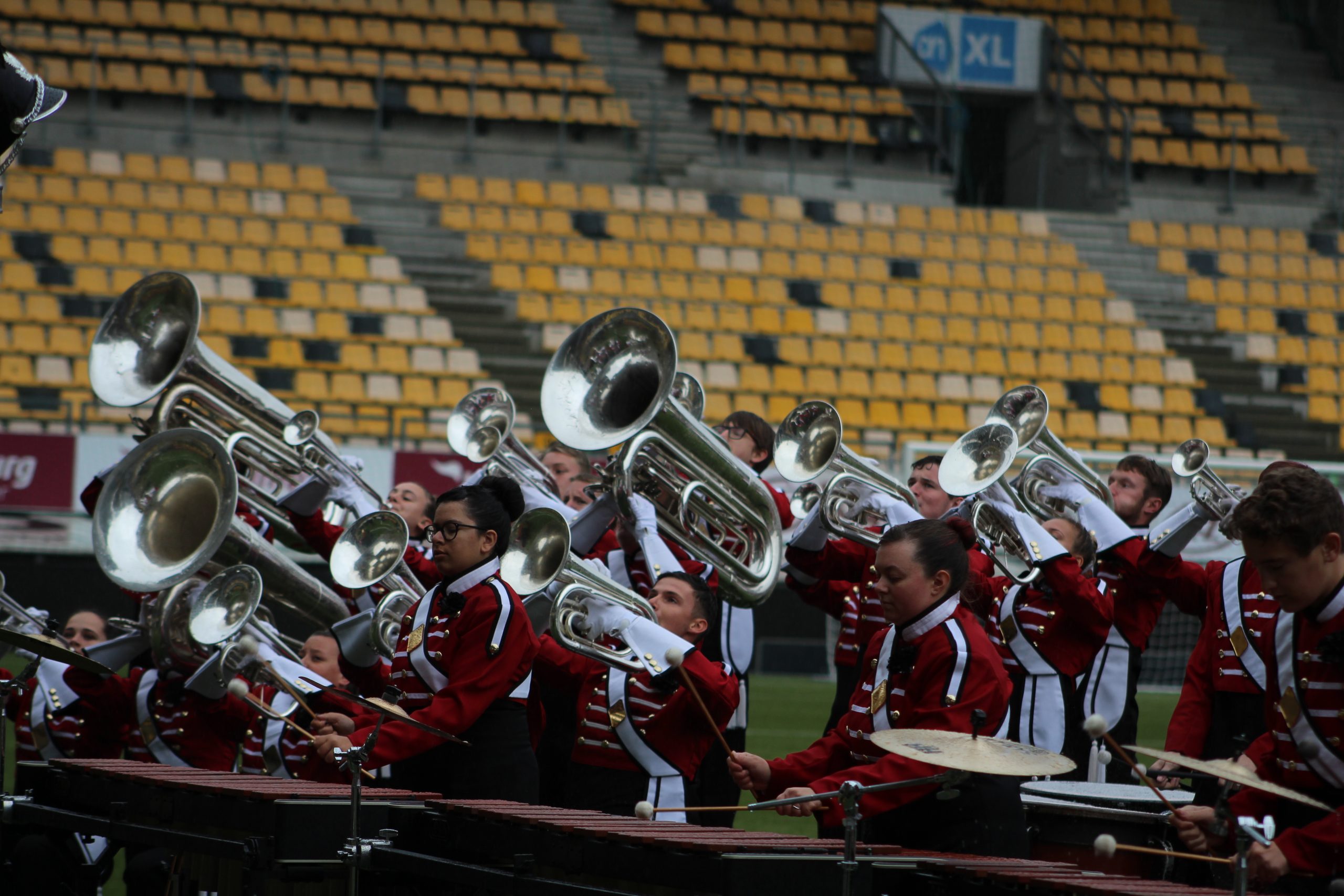 Cadence Drum and Bugle Corps will be coming to compete in the DCA Class A ranks this summer. Cadence hails from Surrey County in England which is located twenty miles south of London. The corps was formed in 1991 as a merger of the Caversham Ambassadors and the Starriders Drum and Bugle Corps. The first directors of the corps were Dave Champion and Roger Treacher. The corps then merged with the Raiders from Surrey and this final merger led to the most successful period in corps history. 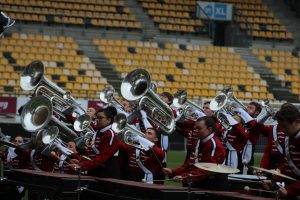 After the corps formation in 1991, the corps competed in the Drum Corps United Kingdom (DCUK) circuit with a steady rise through the ranks of Open Class narrowly missing out on a finals placing in 1992 with a show entitled ” Robin Hood Prince of Thieves”. 1993 and 1994 saw the corps losing a number of members which led to a rebuilding year in 1995 which culminated in a Class A Championship in 1996 with a Russian classical music book. Returning to Open Class in 1997 after the merger with the Raiders, the corps made Open Class finals for the first time in their history again with a Russian classical music theme which was fast becoming the corps trademark. In 1999, the corps was crowned DCUK Open Class Champions battling with the Kidsgrove Scouts, Senators, and Black Knights with a show called ” Force of Destiny ” featuring the music of Shostakovitch and Rachmaninoff. The following years saw the corps take the Silver medal position no less than four times until 2005 when the corps sadly became inactive due to membership and staffing issues.

After becoming inactive in 2005, the decision was made to carry on with the still in existence Junior Corps, and Cadence started all over again. Fast forward to 2012 and the corps made its return to DCUK competition making finals at its first attempt back and in every year since then. Many of the current corps members are from the original Junior Corps some of whom are entering their fifteenth year marching with Cadence after starting their marching career at eight years of age!

Cadence is very lucky to have three corps within the Cadence Performing Arts organization. The Cadet Corps is for new members from age six and is an introduction into the marching arts with a focus on fun and being part of a group working together. They also try to instill a little discipline to not only prepare them for future marching years but also to assist them in daily life. The Academy is for older members usually twelve years or above. The focus of the Academy is to train members who want to progress to the Main Corps or who want to experience the competitive side of drum corps while still having a fun atmosphere. The Main Corps is open age and caters for anyone over the age of fourteen who wants to start in the marching arts or for those coming back to the activity after a number of years being out. The Main Corps solely rehearses on alternate weekends like many DCA corps do.

All members are being asked to pay their tour fees for the trip over to the United States. They are offered a number of fundraising opportunities throughout the season and in some cases the corps is offering financial assistance to those who have a genuine need. Their 2018 production is entitled ” I AM NATURE ” and is a complete departure from every Cadence show before it. The corps is well known for having a classical style and a Phantom Regiment esque flavor in music and design choices. All has changed in 2018, not because they are coming to DCA but because they feel it is time to evolve just as the activity has evolved over the past ten years. Their show is based on the power of Nature and its effects on all of us as we take Nature for granted every day in our lives. We also sometimes forget that Nature was here before us and will be here long after we have gone. They are very excited with this new direction and hope the drum corps fans will be surprised by their evolution in 2018. 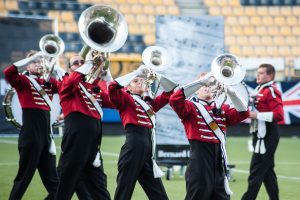 Cadence will arrive in the United States on August 20th and will be based in New Jersey for a few days spending some time with their new American friends from Fusion Core. The corps will then move to Reading, Pennsylvania where they hope to spend some time with the Buccaneers and will be competing at the Reading DCA show on August 25th. All of this culminates at the DCA Championships in Williamsport, Pennsylvania and to compete in Class A prelims. They are also working on a number of public appearances during their two week visit. Cadence will be looking to bring approximately one hundred people to the United States, sixty members and forty staff and supporters. They are both excited as well as nervous about representing the United Kingdom and following in the Kidsgrove Scouts successful footsteps.

Cadence is very lucky in that the Main Corps is one big family with members ranging in age from twelve to sixty-two. Many of their members have been with the corps in excess of fifteen years and this trip to compete in DCA is also a reward for many of the kids who have stuck with the corps throughout the rebuilding years. The Kidsgrove Scouts have been around for over one hundred years but nonetheless Cadence is currently one of the longest surviving drum corps in the United Kingdom. Their message to the fans of DCA when seeing them for the first time is simple. They are coming to entertain the fans with their own brand of drum corps from the United Kingdom. They are small but big in heart and ambition! Cadence will be bringing merchandise with them so DCA fans can be a part of their journey to the United States. 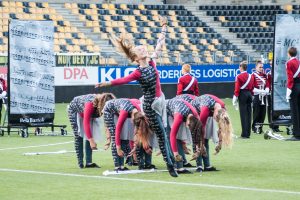 Drum Corps Associates is very pleased that Cadence will be making the journey across the pond to join the ranks of competing corps in 2018. They join a long list of drum corps from other countries who have come to the United States to compete in our Championships. Best of luck to our new friends from Cadence and to enjoy their stay in our country. Special thanks to Cadence Corps Manager Paul Riddell for his provided information on preparing this article.