Marching in a drum corps can at times be demanding as those of us who have marched in a corps can testify to that fact. Learning the drill, repeated run through of sets, weather conditions, loading and unloading the equipment truck, etc can surely take its toll on membership at times during the season. But for a moment let’s consider the role of the drum major in all of this. They are the leaders who have a great amount of responsibility in their roles and who often do not get enough credit for doing so. Meet Andrea Gwyn of the DCA World Champion Reading Buccaneers. 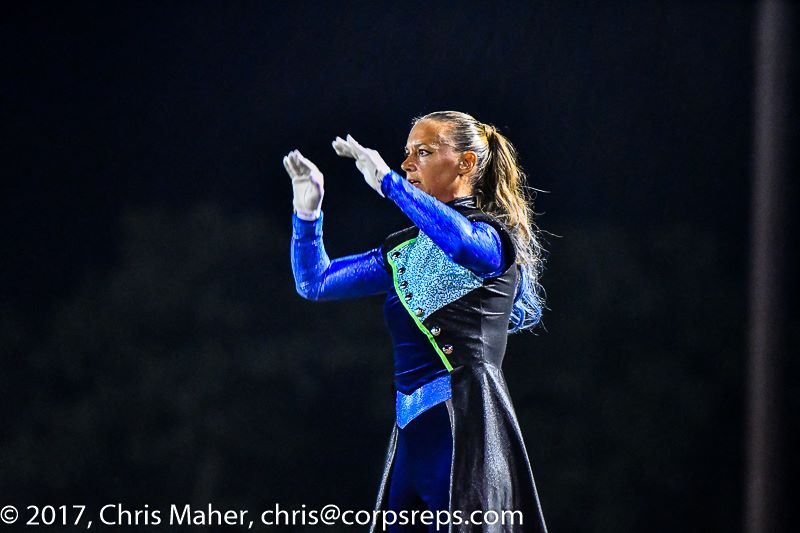 Andrea first started going to drum corps shows in 1983 and tried to figure out how she could march since she was a flute player. She taught herself how to play the mellophone and joined the Rosetto Chieftans in the beginning of 1987. There she met members who were marching in the Reading Buccaneers. They told her there was a soprano spot open, so she filled that spot in May and brought her little sister along to march in the rifle line.

Andrea chose DCA, because as a self-taught mellophone player dreaming of marching in the Garfield Cadets, she used marching in DCA as a stepping stone to gain experience. Reading was the perfect place. After a year of marching in DCA, she auditioned for Garfield and made it. Andrea aged our in 1989 but wanted to give back what she ” took ” and returned to the Buccaneers.

About this time her life and career started taking off. She has been able to remain with DCA for this long because it is a place where you can enjoy your passion on the weekends and still manage a life, career and family. Andrea did take a break from drum corps in 1995 to start that family, but she always dreamed of someday marching with her two children. Her dream came true, marching with both of them for two years in 2012 and 2013 and then with her daughter for another four years in 2014 to 2017  There were times where she just looked at them on the field from the podium and literally got goose bumps. To be able to share something they are all passionate about and spend a large amount of time together throughout both the winter and summer months was priceless. She was so proud watching them work really hard at something they loved. Having all of that time with them and watching them push themselves, making life-long friends, and being part of something much bigger than the three of them brought them really close together as a family.

Andrea’s most memorable drum corps moment came in 2013 during and immediately after their DCA finals performance. She didn’t think she could feel more happy or more proud of what the 2013 Buccaneers accomplished during that finals run in 2013. Their journey together that summer was mostly very hard and yet incredibly rewarding. Andrea was grinning through their entire performance due to pride and enjoyment and by the time they ended she was in tears! As the corps was preparing for retreat, and before any scores or placements were announced, she turned and saw her two kids sobbing and hugging in love and happiness for the performance they just left on the field and for what they were a part of together. Her happiness and pride somehow doubled and to her that is what being in the Reading Buccaneers is all about.

I asked Andrea about those who think that anyone can take over her podium and win. She replied, “I’m glad it looks so easy!! I’m sure those who understand what it takes to keep a corps our size together, one that spans the yardage we do, with the drum line and horn line on opposite sides of the field moving at the speed we do isn’t a job that can be done by anyone. Believe or not, this machine cannot run on autopilot. Perhaps those who doubt this should come to our rehearsals and check out what a Buccaneer Drum Major does both on and off the field. Of course I have an important role during the actual performance, but my role behind the scenes and before, during, and after rehearsals is where I contribute most to our success. I would welcome them to come and experience this first hand.”

The Buccaneers have won six DCA Championships with Andrea being a member, all as the Drum Major. I asked her with all the championships and awards the Bucs have won, has that changed you in any way? How do you feel about all the success of the corps? Her response was ” I have an interesting perspective. I’ve had the opportunity to be the drum major during some of its successful times and some of its worst times. Do I enjoy winning,   absolutely. When we work extremely hard and chase perfection all summer long, our success is the icing on the cake. But I was also the drum major in 1991-1994 when we barely made or didn’t make finals. In 1994, we had 20 horns. I had someone ask me a few years ago, knowing I was the drum major today and back then, if I was embarrassed to stand with the rest of the drum majors back then knowing we would come in last. I couldn’t believe the question. Of course we knew we weren’t as good or as loud as everyone else. But that didn’t stop us in fighting for every point we earned. I had the pleasure of leading and representing very dedicated people who took the field and did the best they could. Those people gave up their weekends and sweated every weekend just like we do now. I stand on the podium proud to be a Reading Buccaneer Drum Major, past and present, and I love this corps with all my heart whether we come in tenth or first.”

I asked Andrea that when she is on her podium and the corps is performing on the field, if she can tell if they are on or not. She answered, “Absolutely. The drum corps has a vibe even as early as the show warm-ups. I know how the rehearsal was that day. I know how they are feeling. I know when I look at them on the field as we wait to start the show if they are ready to dominate or if they are going to be timid. Of course there are a lot of other cues during the show like how the drill is going, how hard I have to work for tempo control, how hard the horn line is working for volume, those kinds of things. And this can change all throughout the show. As the drum major, I’m completely integrated. I’m always feeling how the corps is doing and I use this to know how to manage the performance on a moment to moment basis.”

Andrea’s career as a regulatory affairs professional for a vaccine company, Sanofi Pasteur, keeps her pretty busy during the week. However, in her spare time she likes attending Penn State home games to watch McKenna (and Connor in the past) march in the Blue Band. She also enjoys knitting and crocheting and playing her bagpipes. (She used to march in a pipe band but due to drum corps conflicts she now just chases bears with them). She also enjoys gardening and doing Spartan Races with her boyfriend and fellow Buccaneer Greg Shelley. Her message to drum corps fans when they watch the Buccaneers perform this season: It will be similar to last year where they will explore new things. It promises some really challenging and fun music this year and hope that all fans will enjoy their show.

Andrea Gwyn is a fierce competitor, a true leader, and a winner. She may well be one of the most underrated drum majors when all is said and done. She is not flashy in her conducting but all this lady does is win!