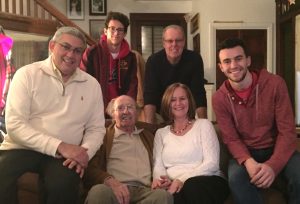 Traditions come in a great many ways such as holidays, sports, traditions within families, and many more too numerous to name. Our activity of drum corps also have traditions that have been carried on through the years by family members who continue their family name by marching in a corps to this day. Meet the Capone family from Pennsylvania whose drum corps roots date back to 1963 when Joseph Capone was one of the original seven corps directors of the seven charter member corps. The Reading Buccaneers, Connecticut Hurricanes, Interstatesmen, Archer-Epler Musketeers, Pittsburgh Rockets, Yankee Rebels, and the New York Skyliners were the corps that comprised DCA in September of 1963 when the charter was written, DCA’s name was chosen, and they were immortalized as charter members.

The main base of the Capone family tree starts with Florindo ” Pete ” Capone who marched with Post 351 drum corps which was made up of World War I veterans in the 1930’s. Looking to include younger members, he was instrumental in starting Post 351 Sons of the American Legion Junior Corps in 1936. Looking to help the returning service men from World War II, in 1947 he contacted fifteen legion post members to donate three thousand dollars in two hours of phone calls to start the Pittsburgh Rockets Senior Corps where he helped manage the group. He remained active in the corps and American Legion for another twenty five years. His son, Joseph T. Capone began his marching career with the Seckatary Hawkins Drum Corps out of Pittsburgh in 1936 and then in the Sons of the American Legion before World War II. After serving in the Second World War, he was injured in battle and returned home unable to march again. He took over the role of business manager for the Rockets. Joe served as director for the corps from 1947 to 1974. He was inducted into the World Drum Corps Hall of Fame in 1980.

Joe’s son Thom marched with the Rockets from 1967 to 1974 in the percussion line. Between 1975 and 1980 he worked with the junior version of the Rockets as a percussion instructor. He returned to the drum corps activity in 1983 with the Steel City Ambassadors. Thom was a member of the battery as well as percussion instructor from 1986 to 1990 and served as the staff coordinator in 1990. In addition to DCA, he has instructed various high school drum lines in the Western Pennsylvania area. Thom is now a retired art and industrial arts teacher, although he continues to design and build scenery for local musicals. He is also an Associate Member of the World Drum Corps Hall of Fame. Thom’s wife Martha, joined Steel City in 1985 as a member of the color guard, where she marched, instructed, and wrote for the guard from 1986 through 1990. Another drum corps marriage took place in 1987 when Thom and Martha exchanged vows two weeks after DCA Championships. Martha has instructed numerous guards in Western Pennsylvania. She recently retired from the public schools as a music teacher and band director, and continues to teach private lessons and perform on the flute. Thom and Martha have volunteered with Cadets2 during the past two seasons traveling with their two sons to camps and helping with the food crew, uniforms, props and transportation. They took their sons to their first drum corps show when they were ages nine and seven and they immediately expressed a desire to march someday. 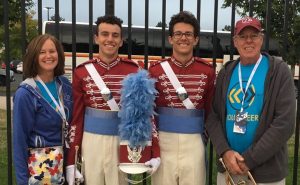 Leonardo age nineteen their first son, just finished his second year marching with the Cadets2 as a member of the trumpet section and was a soloist this past season. He is currently a sophomore at Baldwin Wallace Conservatory majoring in music education and trumpet. He also recently auditioned with the Cadets and the Bluecoats for the trumpet sections, and is accepting the contract from the Bluecoats to march next summer. His brother, Antonio, age seventeen also performed with Cadets2 this past season as a member of the front ensemble. He is a senior at Pittsburgh Central Catholic where he is a member of the marching band, concert band, masque, and “Free Verse” a cappella choir. He loves being part of the Cadets2 organization, and is looking forward to continuing with them in 2018. Both boys are proud to be the fourth generation of the Capone family to march in a drum corps.

Val Capone, Thom’s uncle, began his drum corps career with the Sons of the American Legion and then with the Rockets. He played in the horn line and was the brass arranger and drum major for the Rockets until 1965. He moved to Miami and directed the Miami Vanguard until the mid-1970’s and was also a member of the National Judges Association. In 1985, Val was inducted into the World Drum Corps Hall of Fame. Val’s four children, Valerie, Larry, Shelly, and Phillip all marched with the Miami Vanguard in the 1960’s and 1970’s. Carmen Capone, Joe and Val’s older brother, marched with the Sons of the American Legion and the Rockets from 1947 until 1968 as a baritone horn player. He remained active in the military and retired as a Colonel in the Army reserves. Thom’s two brothers Jim and Joe also marched with the Rockets. Jim was a trumpet player from 1966 until 1974, and Joe was a member of the battery in 1972 and 1973.