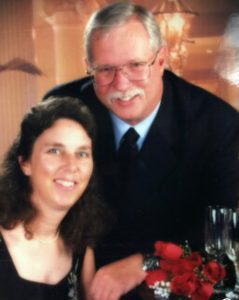 Drum Corps Associates made history at the Annual Meeting in December when Pat Bocker was elected to serve as Vice President.   Pat has become the first female in the circuits history to ever sit in the Vice President’s chair.   She has a vast knowledge of drum corps having marched, taught, and served on administration boards.

Pat began her marching career in 1978 with the Cadets of Greece from Rochester, New York as a mellophone player in her first year. She switched to the drum line playing cymbals, marimba, and then tenor drum from 1979 until 1981. In 1982 the Cadets of Greece split up, half the corps members went to Fusion junior corps, and the rest to Rochester Lockport Renegades junior corps. Pat chose to follow Vince Bruni and joined the Renegades as a mellophone player. After the DCI season of 1982, she entered the United States Marine Corps as a mellophone player with the drum and bugle corps in 29 Palms California. 1985 was her age out year so she contacted Mr. Bruni for suggestions on where to march in her age out year. Taking his advice, she took a thirty day leave and flew back to join the Class A Northmen from Rochester, New York playing soprano. This was a great age out year for her as the corps placed in the top five at Class A finals in Madison, Wisconsin. This was her last year marching drum corps for twenty-four years as no all age corps was close to her home in Southern California. All that changed in 2009 as she began working a normal Monday to Friday schedule and So Cal Dream changed their location to about five minutes from her home. She joined Dream in 2009 until 2010 playing mellophone and also was able to perform in mini corps that year with Gulf Coast Sound.

In 2011 with her husband’s encouragement, she fulfilled her personal dream and marched with the Empire Statesmen playing baritone. This was going to be a one year and done deal since she was commuting from California. She went back to Dream in 2012, not only as a mellophone player, but also on the Board of Directors. Once their season was completed, Pat began the weekly commute back to Rochester and filled a baritone spot for the Statesmen. 2013 was the 30th anniversary and final year for the Empire Statesmen, so she once again cashed in her airline miles to march with Empire playing mellophone. Pat remained on the Board of Directors for Dream and in 2014 the corps made the decision to go inactive and she no longer had a drum corps to march with. With encouragement from a friend as well as her husband she chose to march mellophone with Fusion Core and remained with Fusion from 2014 until 2016. She also served Fusion as an administration assistant in 2015 and 2016. She retired after the 2016 season, but remained with Fusion as administration assistant. Pat decided that this was her chance to give back to the drum corps activity after all those years, so she began to instruct a young Open Class DCI corps from Riverside, California called the Watchmen and remains there on staff. This past DCA season, Pat marched with the Honor Guard from Fusion Core at the DCA competition in Peckville, Pennstlvania. In early August she was contacted by a member of the Kidsgrove Scouts saying they lost a trumpet player due to injury. Pat contacted Rob Swindells, their corps director and once again found herself on the football field learning drill three days before the Reading show. She finished out the 2017 season competing at DCA, DCUK, and Drum Corps Europe’s Championships.

As Pat moves to a new phase in her drum corps career she remains excited teaching at the DCI level and hopefully passing on her love for drum corps to a new generation. She is also excited to be on the board for DCA.  Her goal is that DCA can find the balance within the activity where a new generation can experience DCA and enjoy it, as well as the old timers.  Pat knows that Williamsport is excited to host the DCA Championships in 2017 and 2018 and she plans to work with the board and the corps to assure that this will be a great finals experience for the city and spectators alike, and hopefully create new fans.

Pat introduced her husband, Anders, to drum corps in 2007 when DCI came to the Rose Bowl for championships. His daughter was in marching band but he had never seen DCI before. When Pat started marching again in 2009, she and her husband actually housed some members of Dream and in 2010 Anders began to run the souvenir table. He even ended up on the Board of Directors for Dream. In 2012 he also helped pushing props for the Statesmen, and played water boy and gopher for Fusion Core from 2014 until 2016. All this from a man who until 2007 had no inkling as to what drum corps was. Anders was the one who encouraged Pat to travel east in 2011 to march and every year her begging to march just one more year was greeted with his understanding smile. As Pat takes on her new role in DCA, Anders asks when he will be put to work! Pat and Anders began dating in 2005 and were married in 2012. During the off season of drum corps, they both love to go on cruises and actually got engaged and married on a cruise. So each year on their anniversary they celebrate by going on a cruise. During her free time Pat likes to work out and play pickle ball. What is pickle ball you ask? Pickle ball is a kind of miniature tennis. They both like to travel as Anders was born in Sweden so they have taken trips back to Sweden to visit his family. Last April they moved to Las Vegas and attend AAA baseball games and most recently became Golden Knights hockey fans and have attended numerous games. Each year Pat takes her one granddaughter on a trip together over her summer vacation.

Pat retired from her ” real job ” just about a year ago where she worked for the Federal Aviation Administration since 1992 as an electronic technician.   She worked in San Diego, California in the POCC (Pacific Operations Control Center), basically a call center for the western third of the United States. There, they monitor, track, and coordinate outages for the ground equipment which air traffic and airlines utilize for communications, navigation, RADARS, and landing equipment. She was also a liaison for Utah, Arizona, and Hawaii assuring that the logging and coordination policies were adhered to. Pat was also the Western area TOAAR (technical operations aircraft accident representative) where she assisted in drafting procedures where in cases of aircraft accidents, how to determine if the ground equipment may have been a factor in an accident and procedures to certify that the equipment was operational within standards. This drum corps fans is not your normal 9 to 5 everyday job!

Drum Corps Associates is proud and excited to welcome Pat Bocker to the position of Vice President.