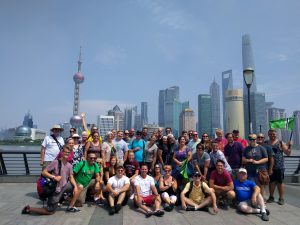 After competing in the DCA World Championships, the Govenaires accepted an invitation to participate in the 2016 Shanghai Tourism Festival. This once-in-a-lifetime trip started on Wednesday September 7, and featured various sight-seeing venues and performances. The main event of the tour was the gigantic night parade which was held on Saturday, September 10. The touring group consisted of Govenaire members and alumni plus members from the Kilties and Minnesota Brass Inc.

The corps was invited last October by the Festival Committee and newly appointed Managing Director Kate Falvey presented the invitation to the President of the Board. Approval was given to go ahead with it and after sending in a video and filling out the necessary application, the corps was accepted in January and decided to fully commit the resources. The majority of the expenses for the trip were covered by the Festival Committee. However, the visa and travel costs were entirely the members financial responsibility. The corps applied for a federal grant and received it , so the participants of the trip ended up paying only for their visas and their flight deposit.

They brought all of their equipment except for the battery and also did not bring any pit equipment at all since it was a parade. Their Mapex reps in the United States and in Taiwan helped them by sending equipment from Bejing to Shanghai for them to borrow while they were there. The Mapex representative in Taiwan was very helpful and accommodating for what was needed for the parade and concerts. Only the horns, guard equipment, and cymbals were brought over by the members. The customs process went very smoothly with no issues going into or out of China.

The Chinese were truly amazing to the corps while they were there and were treated like rock stars. One morning the corps went to the park and played through their music. This served as a rehearsal for the concerts that they were going to play later in the tour and were greeted by a crowd of five hundred plus people. They all wanted pictures with the corps and the picture taking continued through their tour. English speaking tour guides were assigned to the corps for the entire trip.

The night parade was especially amazing because the corps lined up next to all of the other international groups and got to meet people from all over the world. FOUR HUNDRED AND FIFTY THOUSAND people lined the parade route and over TWENTY MILLION watched from home on television! The Shanghai Tourism Festival is a way for Shanghai to promote and celebrate its relationships with other countries throughout the world. Shanghai is the tourism and financial center of China and they are very proud of the relationships they have made these last few decades. The festival is a way to honor those relationships and welcome their partners to China.

The Musikkappalle Obermarkersdorf band from Austria stayed at the same hotel as the corps and many new friendships were made especially on Face book. They also helped out their new Austrian friends on the way home from an event when their driver became seriously ill. Kate Falvey was able to talk to their Chinese tour guide in German in order to get everything straightened out. New friends were made with the Texas Tech Dance Team as well who were also staying at the same hotel. The corps went to the Oriental Pearl Television Tower where they performed a concert and went to the top plus the Shanghai Tower which is the second highest building in the world. They also visited the gardens of Suzhou where they learned about pearl and jade production and also about silk manufacturing.

The Govenaires had a lifetime worth of memories come out of this tour and the friendships they made with groups from Austria, Germany, Switzerland, and Ireland are not to be forgotten. Although they were there for only seven days, they saw so much and were able to share their passion for drum corps with a group of people who may have never heard of it. With all of the negative things going on in our world today, this was one way for people from different countries to come together and bond as one. The Govenaires are to be highly commended for representing our country and our drum corps activity on a job well done.