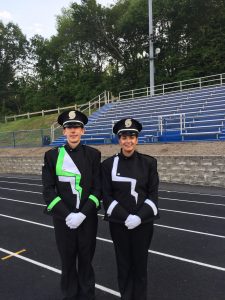 The Connecticut Hurricanes are extremely pleased to announce their new Drum Majors for the upcoming 2017 DCA competition season. Both of these individuals have a great deal of musical experience and leadership skills and will be a perfect fit to lead the corps.

Matthew Piros, age twenty-seven, will be the Head Drum Major for the Hurricanes and is entering his fifth year with the corps. Matt played euphonium for two years and mellophone for the past two seasons with the Hurricanes. He is currently an elementary school music teacher in Andover, Connecticut. Matt has attended Trinity College, University of New Haven, and currently the University of Connecticut as he continues his education. His goal is to become an elementary school principal and has been taking tests to reach that goal. Matt joined the Hurricanes because it was an avenue for him to play music at the highest level. Since this will be his first year on the podium, his wish is for the corps to be the best they can and to succeed. He has a great personality that will easily connect with the fans. Matt knows that replacing the VERY popular Brian Maroldt may be hard at first but he is confident that he will get the job done. Brian Maroldt has taken over the duties of Corps Director this season and we wish him nothing but success in his new role. Most recently, Matt became engaged to Miss Leah LePere, a trumpet player in the Hurricanes horn line. When not doing drum corps, Matt loves to cycle and enjoys reading good books.

Christina Garbalosa, age twenty-four, assumes the position as Assistant Drum Major for the Hurricanes in 2017. She attended Cheshire High School where she played clarinet, saxaphone, and baritone in the marching band. From there she went on to the University of Delaware Marching Band where she played tuba. Christina has been a member of the Hurricanes for the past two years playing tuba and joined the Hurricanes to continue her love of music. She has a two year degree from Quinipiac University in Spanish Education. She hopes that the fans this season will enjoy watching the Hurricanes show as it is extremely fan friendly. In her spare time Christina loves to knit, crochet and read books. And to all the single male fans and corps members out there, you can relax as this very attractive young lady has a boyfriend!

The drum corps community wishes Matt and Christina the best of luck this season as both of these young people have the right mind set, attitude, and personalities to make them succeed.