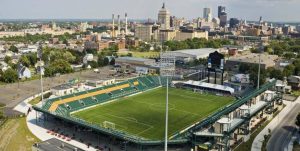 In what promises to be an exciting close to the DCA 2017, the competition between the top corps is reaching its most exciting level in recent years.    It is bitter sweet as we prepare to leave Rochester, NY which has become so familiar to many.    The city of Rochester has played host for our championship weekend event for the nineteenth time which is more than any other city in DCA’s long history!  Scranton, Allentown, Annapolis, Syracuse and Bridgeport are just a few other cities who have hosted the event over the decades, but nowhere near the amount that the city of Rochester has.   It all began when Rochester played host for Championships in 1968 thru 1971 and were back again in 1973 thru 1976. After a one year return in 1996, Rochester played host from 2006 thru 2011. Finally, the city hosted from 2014 thru this year’s Championships at Capelli Sports Stadium. The Reading Buccaneers were crowned champions in 1968 the very first year we were in Rochester.   Will they do it again in our last year in Rochester?  Only time will tell…..

The 2017 DCA regular season enters its last weekend of regular competition with shows in Georgia, Minnesota, Connecticut and Pennsylvania.    Over the past several weeks the competition between the Hawthorne Caballeros, White Sabers, Fusion Core, and Cadets2 has seen these corps flip flopping positions with only tenths of a point between them.   This year Atlanta CV and the Kidsgrove Scouts will be the unknown factors added to the mix.   Kidsgrove will be making their fourth trip to the United States in 2017 and will be competing in Reading, Pennsylvania on August 26th.   The Bushwackers, Sunrisers, Minnesota Brass Inc., Skyliners, Hurricanes, and Carolina Gold will all be out this weekend to jockey for a position at prelims.   The Class A defending Champions Cincinnati Tradition will be looking to make it two straight titles while the Govenaires, Erie Thunderbirds, Chops Inc., and the Southern Knights will be looking to knock them off.

Championship weekend begins on Friday night September 1, with the annual I&E competition and mini corps show at the Riverside Convention Center in downtown Rochester starting at five o’clock.    This popular event is free and open to the public!  The mini corps competition is tentatively set for a nine o’clock start time.   Another great addition to Friday night is having a concert right on main street by the Hawthorne Caballeros Alumni Corps.  Imagine what that will sound like blasting against all the downtown buildings!  Saturday, September 2, has the preliminary competition starting at two o’clock at Capelli Sports Stadium.  This year’s Alumni Spectacular will start at ten o’clock on Sunday September 3 followed by the DCA World Championships at 5 o’clock.

Drum Corps Associates would like to thank the city of Rochester & Monroe County for being such wonderful partners over the years.   We don’t say good-bye….. but till we meet again!

Ticket sales are going fast in what promises to be a highly competitive 2017 drum corps championship. For information on Championship weekend, please visit the DCA web site at www.dcacorps.org   Come out and join the fun or if you can’t make the trip to Rochester be sure to sign up for the live streaming at flomarching.com.